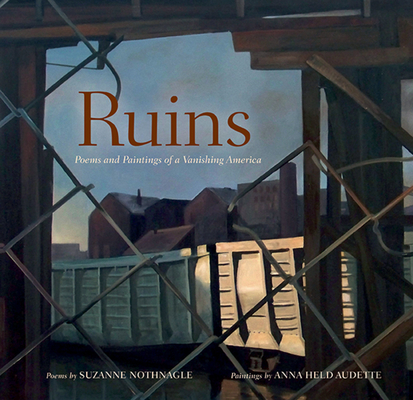 Poems and Paintings of a Vanishing America

In earlier civilizations ruins were remainders and reminders of the glory of long passed times. People pondered what could still be seen of the palaces, great public buildings and places of worship. The everyday working world was left without any record to commemorate its importance. Ruins now occupy a special place in our contemporary landscape. Nearly everywhere there are vestiges of commercial buildings and machines that many people still remember as vital to their communities. Industrial progress has doomed them in the space of a few decades. They are the relics of America's industrial glory at mid Twentieth century: great structures erected to support the technologies that shaped the country we now live in. In this book of poems and paintings both poet and artist seek to memorialize the recent industrial past of America as both worker and machine fall into oblivion and the declining past yields to the ruthless changes of the present. Audette paints abandoned factories, ships, bridges, and large machines and much smaller artifacts such as discarded railroad couplings, carburetors and machine tools. In contrast, Nothnagle memorializes the intimate lives of the men and women who made and used these engines and devices in the workshops, now abandoned as they themselves have been; their triumphs and victories forgotten. The poems are lyrical and harsh, short and to the point, knowing and critical, like accents on the canvases. The titles say it all, Calling In, Change to Spare, Grudges, Two Ton Bucket, Yard Sale, Buddy, Chance, Funeral, and speak of frailty and strength, chance and misfortune unlike the machines she also writes about This machine was built to last, making parts to be assembled, parts that fit together like they were meant to, parts that always make sense, no matter what crazy people do to people around the world.

Anna Held Audette is a prominent late twentieth century American painter and teacher with works in the National Gallery of Art, the Fitzwilliam Museum in Cambridge, the Rijksmuseum in Amsterdam, the National Gallery of Science, NASA and a number of important regional museums and private collections. She was diagnosed with Fronto-Temporal Dementia in 2008 at the Adler Center for Geriatric Medicine at Yale. She is the author of two books including the classic 'The Blank Canvas: Inviting the Muse'.Suzanne Nothnagle ran a small, specialized machine shop for 27 years. She is a graduate of Marlboro College and Dartmouth College. Her poetry has appeared in the 'Connecticut Review', 'Portrait', 'Still Puddle poets' and 'The Anthology of New England Writers' among others. She has also written an oral history of the machine tool industry in Windsor and Springfield, Vermont, 'An Oral history of the Connecticut River'. She lives in Hartland, VT and teaches at Granite State College.
Loading...
or
Not Currently Available for Direct Purchase