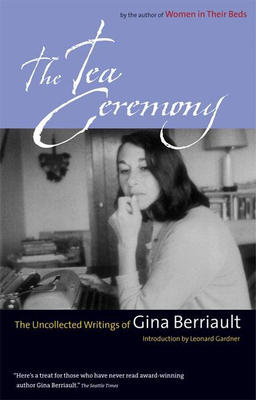 Compiled by Gina Berriault's daughter and by her long-time companion, Leonard Gardner, this collection opens with five stories, including, The Figure Skater, the last story published before she died in 1999. Also here is the first section of the novel she left unfinished and her brilliant acceptance speech for the Commonwealth Club of California's Gold Medal for Literature. As reclusive as she was meticulous, Gina Berriault did not suffer fools and sat for only a handful of interviews. She was acutely aware of nuance and tended to write and rewrite not only the answers but also the questions, making the interview printed here is as finished and beautiful as any of her writing. Here, too, are her essays for Rolling Stone, Hungry Mind, and Esquire on subjects as diverse as the first topless dancers in San Francisco's North Beach to the last execution by firing squad. As a whole this collection becomes her credo on American culture, politics and the written word.

Gina Berriault was the author of four novels, three earlier short story collections, and several screenplays. One of the most celebrated short story writers in her lifetime, she was the recipient of multiple prestigious awards, including the PEN/Faulkner Award, the National Book Critics Circle Award, the Rea Award for the Short Story, and a Commonwealth Gold Medal for Literature. She died in 1999. Leonard Gardner is a novelist and screenwriter. His novel Fat City was made into a film by John Huston and is recognized as a classic American novel. He lived with Gina Berriault for many years.
Loading...
or
Not Currently Available for Direct Purchase