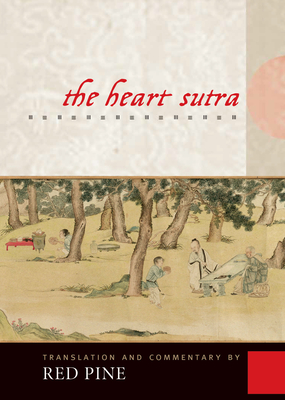 Winner of the Thornton Wilder Prize for Translation

The most influential Buddhist sutra in the Mahayana tradition, from one of the world’s preeminent translators of religious texts

The Heart Sutra is Buddhism in a nutshell. It has had the most profound and wide–reaching influence of any text in Buddhism. This short text covers more of the Buddha’s teachings than any other scripture, and it does so without being superficial or hurried. Although the original author is unknown, he was clearly someone with a deep realization of the Dharma.

For this new English translation, Red Pine, award–winning translator of Chinese poetry and religious texts, has utilized various Sanskrit and Chinese versions, refining the teachings of dozens of ancient teachers together with his own commentary to offer a profound word–for–word explication. Divided into four parts and broken into thirty–five lines to make it easier to study or chant, and containing a glossary of names, terms, and texts, The Heart Sutra is a wise book of deep teaching destined to become the standard edition of this timeless statement of Mahayana truth.

Praise For The Heart Sutra…

Winner of the 2018 Thornton Wilder Prize for Translation

Bill Porter (aka "Red Pine") is widely recognized as one of the world's preeminent translators of Chinese poetry and religious texts; he assumes the pen name "Red Pine" for his translations.

Writing as Red Pine, he was the first translator to ever translate the entirety of Han-shan's oeurve into English, published as The Collected Songs of Cold Mountain. Red Pine was also the first to translate into English the entirely of The Poems of the Masters. He has also translated several of the major Buddhist sutras, including the Heart Sutra, Diamond Sutra, and Platform Sutra.
Loading...
or
Not Currently Available for Direct Purchase