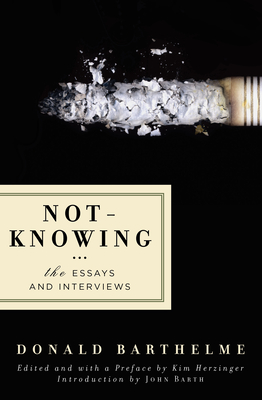 The Essays and Interviews

The wildly varied essays in Not–Knowing combine to form a posthumous manifesto of one of America's masters of literary experiment. Here are Barthelme's thoughts on writing (his own and others); his observations on art, architecture, film, and city life; interviews, including two previously unpublished; and meditations on everything from Superman III to the art of rendering "Melancholy Baby" on jazz banjolele. This is a rich and eclectic selection of work by the man Robert Coover has called "one of the great citizens of contemporary world letters."

Donald Barthelme is a winner of the National Book Award and is the author of over seventeen books, including Flying to America, City Life (one of Time Magazine’s Best Books of the Year), and Sixty Stories, which was nominated for the National Book Critics Circle Award, the PEN/Faulkner Award, and the Los Angeles Times Book Prize. He was a founder of the renowned University of Houston Creative Writing Program, where he taught for many years. He died in 1989.
Loading...
or support indie stores by buying on