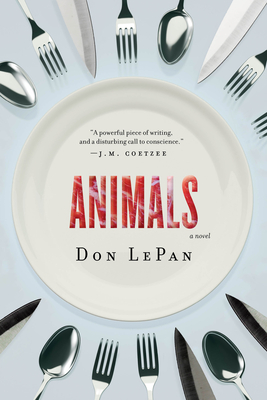 A riveting dystopian novel that examines how humans mistreat animals, and each other: “A powerful piece of writing, and a disturbing call to conscience” (J.M. Coetzee).

It is more than 100 years in the future and the horrors of factory farming, combined with the widespread abuse of antibiotics, have led to mass extinctions. The majority of all mammals, birds, and fish that humans have eaten for millennia no longer exist. Those not fully capable are deemed undeserving of an equal share of scarce medical resources and are ultimately classified as less than human. As paranoia about our food supplies spreads, a forceful new logic takes hold; in the blink of a millennial eye the disenfranchised have become our food. Don LePan’s “well-plotted” and “formally audacious” novel shows us a world at once eerily foreign and disturbingly familiar (Booklist).

It follows the dramatic events that unfold within a family after they take in an abandoned mongrel boy. In the sharp-edged poignancy of the ethical questions it poses, in the striking narrative techniques it employs, and above all, in the remarkable power of the story it tells, Animals proves itself a transformative work of fiction.

Praise For Animals: A Novel…

“LePan has an astute understanding of the contradictions and weaknesses of human nature . . . [Animals] will most certainly make you look at that steak on your dinner plate a little differently.” —The Boston Globe

"A powerful piece of writing, and a disturbing call to conscience." —J. M. Coetzee

“LePan’s storytelling skills are on full display and the narrative brims with tension . . . Animals is a brave and frequently fascinating novel, wrought with painful choices, harrowing journeys, and a deep passion for its subject matter.”—Montreal Review of Books

“An engrossing, elegantly written, and timely contribution to the great tradition of dystopic fiction.” —Kathryn Shevelow, author of For the Love of Animals

“Devastating. Animals is a powerful novel, and a fully convincing one.” —P. K. Page

“Well written and engrossing. I found that the story hooked me from the start.” —Angus Taylor, University of Victoria, author of Animals and Ethics

“Provocative, original, beautifully crafted and achingly human, this is a novel that illuminates what we so called ‘higher beings’ strive to keep darkly hidden from our consciousness. No more, no more . . . destined to become a classic.” —Catherine Banks, author of Bone Cage

“A deeply moving narrative that can change your life--it did mine.” —Thomas Hurka, Jackman Distinguished Chair in Philosophical Studies, University of Toronto

“An impressive book that makes a powerful statement--I think it is the Animal Farm of these times. It’s also an accomplished work formally; a flowing narrative forms its central current, but brilliant shifts in style and narrative voice keep swirling within that current, and strong commentaries that are moral yet not homiletic keep forming eddies around it.” —Victor Ramraj, Professor of English Literature, University of Calgary, editor of Concert of Voices: An Anthology of World Writing in English

"As an analysis of the human capacity to reconcile sentiment with savagery, it's spot on: psychologically incisive, admirably disquieting . . . LePan may openly grind his axe, but what makes the book powerful is just how keenly that axe cuts through our ethical hypocrisy." —Jim Bartley, The Globe and Mail

Don LePan is the founder of Broadview Press, an independent academic publishing house, and the author of several nonfiction books. Animals is his first novel. Born in Washington, D.C., he has lived in Canada for most of his life.
Loading...
or support indie stores by buying on