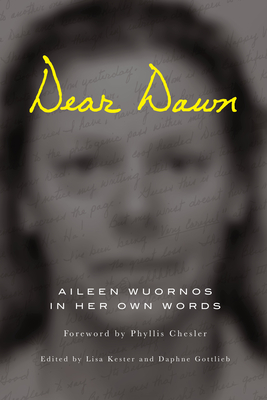 Aileen Wuornos in Her Own Words

The chilling autobiography of the notorious female serial killer who was recently the subject of a two-hour Investigation Discovery special.

Between 1989 and 1990, Aileen Wuornos, a hitchhiking prostitute, shot, killed, and robbed seven men in remote Florida locations. Arrested in 1991, she was condemned to death on six separate counts and executed by lethal injection in 2002.

An abused runaway who turned to prostitution to survive, Wuornos has become iconic of vengeful women who lash out at the nearest target. She has also become a touchstone for women’s, prostitutes’, and prisoners’ rights advocates. Her story has inspired myriad books and articles, as well as the 2003 movie Monster, for which Charlize Theron won an Academy Award. But until now, Wuornos’s uncensored voice has never been heard.

Dear Dawn is Wuornos’s autobiography, culled from her ten-year death row correspondence with beloved childhood friend Dawn Botkins. Authorized for publication by Wuornos and edited under the guidance of Botkins, the letters not only offer Wuornos’s riveting reflections on the murders, legal battles, and media coverage, but go further, revealing her fears and obsessions, her rich humor and empathy, and her gradual disintegration as her execution approached. A candid life story told to a trusted friend, Dear Dawn is a compelling narrative, unwaveringly true to its source.

“It is both empowering and heartbreaking, because Wuornos represents the fury of a wronged girl-gone-wild, whose rage was unleashed on men.” —The Rumpus

Aileen Wuornos was born in Michigan in 1956. Abandoned early by her parents and expelled from her abusive grandfather’s home when she was fourteen and pregnant, she lived in the woods before hitchhiking her way to Florida. In 1986, Wuornos began a relationship with Tyria Moore and supported them both through prostitution and theft. In 1986 she served a thirteen-month sentence for armed robbery. In 1989 she first shot and killed a john who picked her up hitchhiking. She later stated that she acted in self-defense, but the john’s history as a violent sex offender was not allowed into evidence at her trial. Wuornos went on to shoot and kill at least six men between 1989 and 1990 and was arrested in 1991, then tried, convicted and sentenced to death. On the advice of a lawyer, she pled “no contest” for five other murders, receiving a total of six death sentences by February 1993. She was famously if inaccurately dubbed “America’s first female serial killer.” While on death row, Wuornos was legally adopted by Arlene Pralle, a born-again Christian, in 1991, and was championed by many who believed her claims of self-defense. A documentary by Nick Broomfield, Aileen: Portrait of a Serial Killer (1992), portrayed Wuornos as a victim of both sexual abuse and media manipulation. As her execution neared, an increasingly unstable Wuornos retracted her self-defense claims, claiming she needed to go to her death with a clean conscience. Florida Governor Jeb Bush ordered a psychiatric exam, after which Wuornos was deemed mentally competent and executed by lethal injection on October 9, 2002. Thanks to the feature film Monster (2003), and the second Nick Broomfield documentary, Aileen: Life and Death of a Serial Killer (2004), she has become even more famous after her death.

Lisa Kester has worked as a book designer, both freelance and for small presses, for over ten years and is a personal friend of Dawn Botkins. She lives in Oakland.

Phyllis Chesler, Ph.D is an Emerita Professor of Psychology and Women's Studies at City University of New York. An author, psychotherapist, and expert courtroom witness, her thirteen books include Women and Madness; Woman’s Inhumanity to Woman; The Death of Feminism; and The New Anti-Semitism. She is the co-founder of the Association for Women in Psychology and the National Women's Health Network and is a charter member of the Women's Forum. She has lectured and organized political, legal, religious and human rights campaigns worldwide and has appeared on The Today Show, The O'Reilly Factor, Oprah, Nightline, CSPAN, NPR, MSNBC, and many others. She has been published and interviewed in The Washington Post, The International Herald Tribune, The Times of London, Il Foglio, Ha'aretz, The New York Times, The Globe and Mail, The London Guardian, Muslim World Today, and many more. Her full biography can be found on her website, www.phyllis-chesler.com. She lives in New York City.
Loading...
or support indie stores by buying on