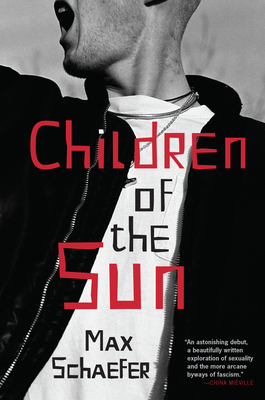 Children of the Sun

“In 1970, Tony gets deeply involved in Britain's violent neo-Nazi subculture while hiding his homosexuality. In a parallel narrative set in 2003, James is a writer researching a screenplay about the real-life notorious gay skinhead Nicky Crane. This is a fascinating look at a time and culture that few Americans know. A perfect choice for mixed-gender book clubs and those interested in political fiction as well as a fast, thrilling read.”
— Kelly Justice, The Fountain Bookstore, Richmond, VA
View the List

1970: Fourteen-year-old Tony becomes seduced by Britain’s neo-Nazi movement, sucked into a world of brutal racist violence and bizarre ritual. It’s an environment in which he must hide his sexuality, in which every encounter is potentially deadly.

2003: James is a young writer, living with his boyfriend. In search of a subject, he begins looking into the Far Right in Britain and its secret gay membership. He becomes particularly fascinated by Nicky Crane, one of the leaders of the neo-Nazi movement who came out in 1992 before dying a year later of AIDS.

The two narrative threads of this extraordinarily assured and ambitious first novel follow Tony through the seventies, eighties, and nineties, as the nationalist movement splinters and weakens; and James through a year in which he becomes dangerously immersed in his research. After risky flirtations with individuals on far right websites, he starts receiving threatening phone calls—the first in a series of unexpected events that ultimately cause the lives of these two very different men to unforgettably intersect.

Children of the Sun is a work of great imaginative sympathy and range—a novel of unblinking honesty but also of deep feeling, which illuminates the surprisingly thin line that separates aggression from tenderness.

Max Schaefer was born in London in 1974 and studied at Cambridge and Harvard. He is the author of Children of the Sun.
Loading...
or support indie stores by buying on