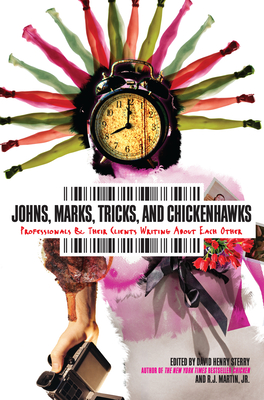 Professionals and Their Clients Writing about Each Other

Johns, Marks, Tricks & Chickenhawks: Professionals & Their Clients Writing about Each Other is the follow-up to Hos, Hookers, Call Girls and Rent Boys, the groundbreaking anthology that appeared on the cover of the New York Times Book Review. "Eye-opening, astonishing, brutally honest and frequently funny... unpretentious and riveting -- graphic, politically incorrect and mostly unquotable in this newspaper." It is a unique sociological document, a collection of mini-memoirs, rants, confessions, dreams, and nightmares by people who buy sex, and people who sell. And because it was compiled by two former sex industry workers, the collection is, like its predecessor, unprecedented in its inclusiveness. $10 crack hos and $5,000 call girls, online escorts and webcam girls, peep show harlots and soccer mom hookers, bent rent boys and wannabe thugs. Then there's the clients. Captains of industry and little old Hasidic men, lunatics masquerading as cops and bratty frat boys, bereaved widows and widowers. This book will shine a light on both sides of these illegal, illicit, forbidden, and often shockingly intimate relationships, which have been demonized, mythologized, trivialized and grotesquely misunderstood by countless Pretty Woman-style books, movies and media. This is hysterical, intense, unexpected, and an ultimately inspiring collection.

David Henry Sterry is the author of more than ten books, including Chicken, a memoir about his experiences as a young sex worker, Unzipped: A true story of Sex, Drugs, Rollerskates and Murder, and Master of Ceremonies: A true story of love, murder, roller-skates and Chippendales. He's made over 300 media appearances and was a finalist for the Henry Miller Award. R.J. Martin, Jr.'s stories, poems and journalism have appeared in numerous anthologies, magazines, newspapers and literary publications. His book, Hos, Hookers, Call Girls, and Rent Boys (Soft Skull, 2009) was favorably reviewed on the cover of the New York Times Book Review and in numerous major media publications and television and radio broadcasts worldwide. A formerly incarcerated person from San Francisco, his work in combating international trafficking in the Bay Area led to a Certificate of Honor from the City and County in 2006. He holds a Master's Degree in Creative Writing from San Francisco State University and is a state-certified Adult Education Instructor who has worked in correctional settings through the Five Keys Charter School and Community Works.
or
Not Currently Available for Direct Purchase
Copyright © 2020 American Booksellers Association