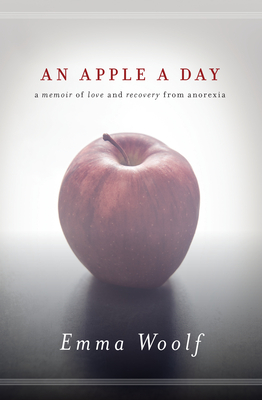 An Apple a Day

A Memoir of Love and Recovery from Anorexia

"She does a good job of explaining how an anorexic worries that if she relaxes the rules, she will be insatiable. An insightful and fascinating read." --Booklist

I haven't tasted chocolate for over ten years and now I'm walking down the street unwrapping a Kit Kat . . . Remember when Kate Moss said, 'Nothing tastes as good as skinny feels'? She's wrong: chocolate does. At the age of thirty-three, after ten years of hiding from the truth, Emma Woolf finally decided it was time to face the biggest challenge of her life. Addicted to hunger, exercise, and control, she was juggling a full-blown eating disorder with a successful career, functioning on an apple a day. Having met the man of her dreams, and wanting a future and a baby together, she decided it was time to stop starving and start living. Honest, hard-hitting, and spoken from the heart, An Apple a Day is a manifesto for the modern generation to stop starving and start living.

"In this heartfelt look at the causes of her eating disorder, Woolf emphatically states that her anorexia was not the result of striving to look good based on unrealistic media images but rather a mental illness based on her need for control . . . Insightful and informative, with fresh insights." --Kirkus Reviews

Born and brought up in London, Emma Woolf studied English at Oxford University. She worked in Psychology publishing for ten years before becoming a freelance journalist and writer, contributing to The Independent, The Times, The Mail on Sunday, Harper's Bazaar, Grazia, Red and Psychologies. Emma's weekly 'An Apple a Day' column in The Times is one of the newspaper's most popular features, with thousands of followers on-line. Emma has made numerous media appearances to discuss body image and eating disorders - most recently on Channel 5 News, Radio 4 Woman's Hour and LBC Book Club - and also consults for BEAT, the National Eating Disorders Association.
or
Not Currently Available for Direct Purchase