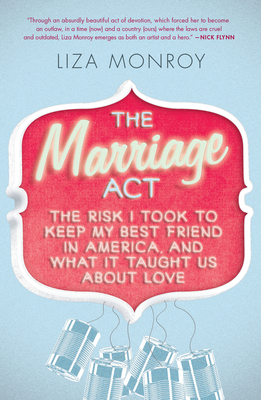 The Risk I Took to Keep My Best Friend in America, and What It Taught Us About Love

After her traditional engagement to her high school sweetheart falls apart, Liza Monroy faced the prospect of another devastating loss: the deportation of her best friend Emir. Desperate to stay in America, Emir tried every legal recourse to obtain a green card knowing that his return to the Middle East—where gay men are often beaten and sometimes killed—was too dangerous. So Liza proposes to Emir in efforts to keep him safe and by her side. After a fast wedding in Las Vegas, the couple faces new adventures and obstacles in both L.A. and New York City as they dodge the INS. Their relationship is compounded further by the fact that Liza’s mother works for the State Department preventing immigration fraud. Through it all, Liza and Emir must contend with professional ambition, adversity, and heartbreak and eventually learn the true lessons of companionship and devotion. This marriage that was not a marriage, in the end, really was.

The Marriage Act is a timely and topical look at the changing face of marriage in America and speaks to the emergent generation forming bonds outside of tradition—and sometimes even outside the law.

Liza Monroy is the author of The Marriage Act: The Risk I Took to Keep My Best Friend in America...And What It Taught Us about Love and Mexican High. Her essays and articles have appeared in The New York Times, The Los Angeles Times, Psychology Today and Poets & Writers. Her work has also been featured in various anthologies, including Goodbye to All That: Writers on Loving and Leaving New York and One Big Family. Liza has taught writing at Columbia University, UCLA Extension, and UC Santa Cruz. She currently lives in Santa Cruz, California.
Loading...
or
Not Currently Available for Direct Purchase