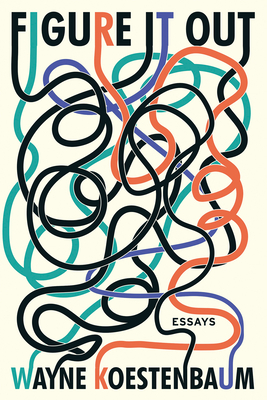 Figure It Out (Paperback)

"Toward what goal do I aspire, ever, but collision? Always accident, concussion, bodies butting together . . . By collision I also mean metaphor and metonymy: operations of slide and slip and transfuse."

He directly proposes assignments to readers: "Buy a one-dollar cactus, and start anthropomorphizing it. Call it Sabrina." "Describe an ungenerous or unkind act you have committed." "Find in every orgasm an encyclopedic richness . . . Reimagine doing the laundry as having an orgasm, and reinterpret orgasm as not a tiny experience, temporally limited, occurring in a single human body, but as an experience that somehow touches on all of human history."

Figure It Out is both a guidebook for, and the embodiment of, the practices of pleasure, attentiveness, art, and play from "one of the most original and relentlessly obsessed cultural spies writing today" (John Waters).

WAYNE KOESTENBAUM's twenty books include Camp Marmalade, Notes on Glaze, The Pink Trance Notebooks, My 1980s & Other Essays, Humiliation, Andy Warhol, Jackie Under My Skin, and The Queen's Throat, a National Book Critics Circle Award finalist. A new edition of his first novel, Circus; Or, Moira Orfei in Aigues-Mortes, was published in 2019. He is a distinguished professor of English, French, and comparative literature at the CUNY Graduate Center in New York. His website is waynekoestenbaum.com.
or support indie stores by buying on
Copyright © 2020 American Booksellers Association