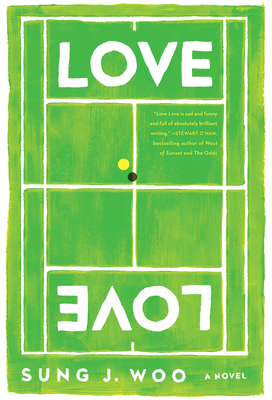 Judy Lee’s life has not turned out the way she’d imagined. She’s divorced, she’s broke, and her dreams of being a painter have fallen by the wayside. Her co-worker Roger might be a member of the Yakuza gang, but he’s also the only person who’s asked her on a date in the last year.

Meanwhile, her bother Kevin, an former professional tennis player, has decided to donate a kidney to their ailing father — until it turns out that he’s not a genetic match. His father reluctantly tells him he was adopted, but the only information Kevin is given about his birth parents is a nude picture of his birth mother. Ultimately Kevin’s quest to learn the truth about his biological parents takes him across lines he never thought he’d cross: from tony Princeton to San Francisco’s seedy Tenderloin district, from the squeaky clean tennis court to the gritty adult film industry.

Told in alternating chapters from the points of view of Judy and Kevin, Love Love is a story about two people figuring out how to live, how to love, and how to be their best selves amidst the chaos of their lives.

Sung J. Woo‘s short stories and essays have appeared in The New York Times, McSweeney’s, and KoreAm Journal. His debut novel, Everything Asian was praised by The Christian Science Monitor and the Chicago Sun-Times. It won the 2010 Asian Pacific American Librarians Association Literature Award. A graduate of Cornell University with an MFA from New York University, he lives in Washington, New Jersey.
Loading...
or support indie stores by buying on