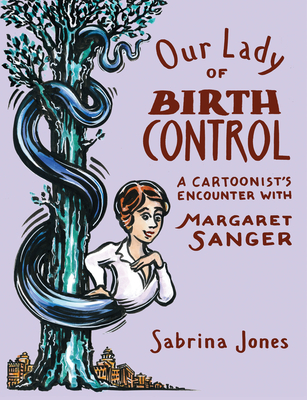 Our Lady of Birth Control

A Cartoonist's Encounter with Margaret Sanger

Working class nurse. Mother of three. Labor organizer. Margaret Sanger—best known as the pioneer of birth control—was revolutionary in more ways than one. In Sabrina Jones’s graphic novel Our Lady of Birth Control, the author illustrates the incredible life of Margaret Sanger (1879-1966), framing the biography with her personal experiences of coming of age at the height of the sexual revolution.

During her lifetime, Sanger transformed herself from working class nurse to an exuberant free-lover and savvy manipulator of the media, the law, and her wealthy supporters. Through direct action, propaganda, exile, and imprisonment, she ultimately succeeded in bringing legal access to birth control to women of all classes. Sanger’s revolutionary actions established organizations that eventually evolved into Planned Parenthood Federation of America.

Jones’s autobiographical sections of Our Lady of Birth Control show her journey into activist art in response to the anti-feminist backlash of the Reagan era. From street theater and protest graphics to alternative comics, her path similarly follows in Margaret’s footsteps, encountering versions of the same adversaries. Her striking imagery evokes the late 20th century, recalling the ashcan artists of The Masses, an acclaimed magazine of Sanger’s formative years.

Powerful, poetic, and extremely personal, this historical graphic novel is an in-depth look at the woman responsible for bringing freedom to the masses.

Sabrina Jones is a comic book artist, writer, and editor who began her career with activist art collective Carnival Knowledge and alternative comics World War 3 Illustrated and Girltalk. Her books Race to Incarcerate: A Graphic Retelling and Isadora Duncan: A Graphic Biography were named “Great Graphic Novels” by the Young Adult Library Services Association. She received a BFA in painting from Pratt Institute and an MFA in illustration from School of Visual Arts. She lives in New York City.
Loading...
or
Not Currently Available for Direct Purchase