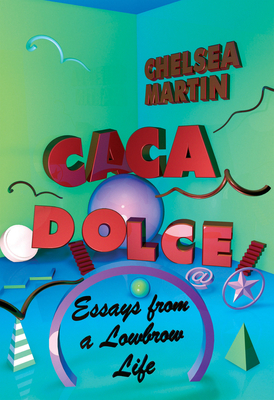 Essays from a Lowbrow Life

An “enchanting” memoir of an artist in search of herself: “A sure hit for fans of Sara Benincasa’s Agorafabulous! and Lena Dunham’s Not That Kind of Girl” (Booklist, starred review).Caca Dolce is the “funny, candid, and bracingly self-aware” story of Chelsea Martin’s coming of age as an artist (The Rumpus). We’re with the author of cult novels Mickey and Even Though I Don’t Miss You as an eleven-year-old atheist, trying to will an alien visitation to her neighborhood; fighting with her stepfather and grappling with a Tourette’s diagnosis as she becomes a teenager; falling under the sway of frenemies and crushes in high school; going into debt to afford what might be a meaningless education at an expensive art college; navigating the messy process of falling in love with a close friend; and struggling for independence from her emotionally manipulative father and from the family and friends in the dead-end California town that has defined her upbringing.

A book about relationships, class, art, sex, money, family, and growing up weird and poor in the late 1990s and early 2000s, Casa Dolce is “a wild ride of a memoir, and a true glimpse into the mind of an artist as she’s figuring out what life is all about” (Kristin Iversen, Nylon).

Chelsea Martin is the author of Everything Was Fine Until Whatever (2009); The Really Funny Thing About Apathy (2010); Even Though I Don’t Miss You (2013), named one of the Best Indie Books of 2013 by Dazed magazine; and Mickey (2016). Her work has appeared in publications including the Poetry Foundation, Hobart, Lena Dunham's Lenny Letter, Vice, and Catapult, and chosen as a Notable Essay in Best American Essays 2016. She is a comic artist and illustrator and the creative director of Universal Error. She holds a BFA from California College of the Arts and currently lives in Spokane, Washington.
Loading...
or
Not Currently Available for Direct Purchase