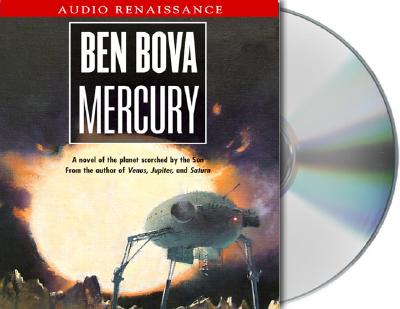 Despite Mercury’s desolateness, there are still those who hope to find diamonds in the rough. Saito Yamagata thinks Mercury’s position will make it an ideal orbit point for satellites that could someday create enough power to propel starships into deep space. He hires Dante Alexios to bring his dreams to life. Astrobiologist Victor Molina thinks the water at Mercury’s poles may harbor evidence of life, and hopes to achieve fame and glory by proving it. Bishop Elliot Danvers has been sent by the religious sect, “The New Morality,” to keep close tabs on their endeavors, which threaten to produce results that contradict biblical teachings.

BEN BOVA is a six-time winner of science fiction's Hugo Award, a former editor of "Analog" and former fiction editor of "Omni," and a past president of the National Space Society and the Science Fiction Writers of America. He is the author of over a hundred works of science fact and fiction. He lives in Florida.

“With Isaac Asimov and Robert Heinlein gone, Bova, author of more than 70 books, is one of the last deans of traditional science fiction. And he hasn’t lost his touch.” —Kansas City Star on Venus

"Recalls the work of Heinlein in his Destination Moon mode, or Hal Clement in any number of stories: a day-after-tomorrow tale crafted with near-journalistic purity...It's a difficult, demanding mode to pursue, and not many choose to nowadays. But Bova does it magnificently." -Paul Di Filippo, Scifi.com
"This audio version, as you expect from Macmillan Audio, is very good and when you listen to the narrators, it's like being re-introduced to old acquanintances." - SFCrowsnest.com