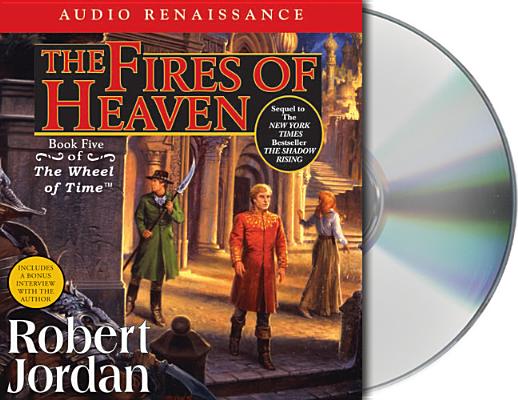 The Fires of Heaven

Book Five of 'The Wheel of Time'

Into the forbidden city of Rhuidean, where Rand al'Thor, now the Dragon Reborn, must conceal his present endeavor from all about him, even Egwene and Moiraine.

Into the Amyrlin's study in the White Tower, where the Amyrlin, Elaida do Avriny a'Roihan, is weaving new plans.

Into the luxurious hidden chamber where the Forsaken Rahvin is meeting with three of his fellows to ensure their ultimate victory over the Dragon.

Into the Queen's court in Caemlyn, where Morgase is curiously in thrall to the handsome Lord Gaebril.

For once the dragon walks the land, the fires of heaven fall where they will, until all men's lives are ablaze.

And in Shayol Ghul, the Dark One stirs...


Praise For The Fires of Heaven: Book Five of 'The Wheel of Time'…

“Kate Reading and Michael Kramer…[provide] a familiar characterization and delivery style for fans of the series. Fresh and engaged, they both maintain a strong pace, and, as they pass the story between them, complement one another.” —AudioFile on The Fires of Heaven, Earphones Award Winner

“The solid performances by Kate Reading and Michael Kramer add a new dimension to the story, especially in the way these veteran narrators breathe life into the inner thoughts of the many major players.” —AudioFile on Crossroads of Twilight