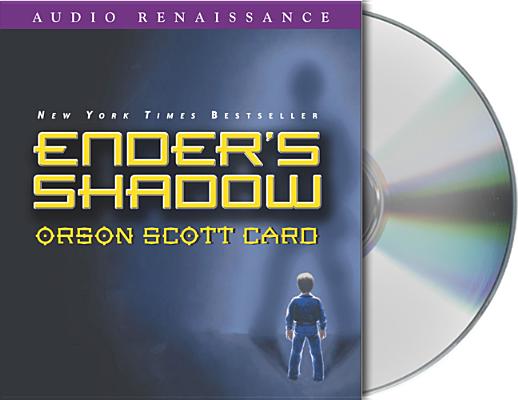 The human race is at War with the "Buggers," an insect-like alien race. As Earth prepares to defend itself from total destruction at the hands of an inscrutable enemy, all focus is on the development of military geniuses who can fight such a war, and win. The long distances of interstellar space have given hope to the defenders of Earth--they have time to train these future commanders up from childhood, forging them into an irresistible force in the high orbital facility called the Battle School. Andrew "Ender" Wiggin was not the only child in the Battle School; he was just the best of the best. In Ender's Shadow, Card tells the story of another of those precocious generals, the one they called Bean--the one who became Ender's right hand, part of his team, in the final battle against the Buggers. Bean's past was a battle just to survive. His success brought him to the attention of the Battle School's recruiters, those people scouring the planet for leaders, tacticians, and generals to save Earth from the threat of alien invasion. Bean was sent into orbit, to the Battle School. And there he met Ender....

Gabrielle de Cuir is a Grammy-nominated and Audie Award-winning producer whose narration credits include the voice of Valentine in Orson Scott Card’s Ender novels, Ursula K. Le Guin’s The Tombs of Atuan, and Natalie Angier’s Woman, for which she was awarded AudioFile magazine’s Golden Earphones Award.  She lives in Los Angeles where she also directs theatre and presently has several projects in various stages of development for film.

“You can't step into the same river twice, but Card has gracefully dipped twice into the same inkwell--once for Ender's Game, and again for his stand-alone ‘parallel novel.' As always, everyone will be struck by the power of Card's children, always more and less than human, perfect yet struggling, tragic, yet hopeful, wondrous and strange.” —Publishers Weekly (starred review) on Ender's Shadow

“I've saved my favorite for last; if you loved Ender's Game, you will go nuts for these fantastic full-cast recordings.” —Examiner.com on Ender's Game and Ender's Shadow