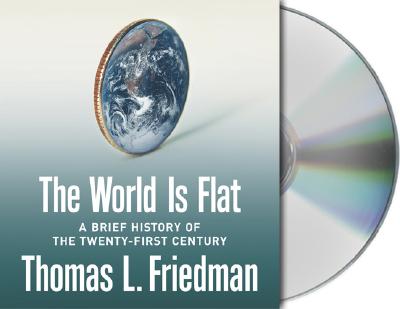 The World Is Flat (Compact Disc)

THOMAS L. FRIEDMAN has won the Pulitzer Prize three times for his work at "The New York Times," where he serves as the foreign affairs columnist. He is the author of three best-selling books: "From Beirut to Jerusalem "(FSG, 1989), winner of the National Book Award for nonfiction and still considered to be the definitive work on the Middle East, " The Lexus and the Olive Tree: Understanding Globalization" (FSG, 1999), and "Longitudes and Attitudes: Exploring the World After September 11 "(FSG, 2002). He lives in Bethesda, Maryland, with his family.

Praise For The World Is Flat: A Brief History of the Twenty-first Century…

Praise for Longitudes and Attitudes:
“Friedman has a deep, clear voice, which perfectly complements his highly accessible prose.”—AudioFile

“Eminently worth reading...It is Friedman’s ability to see a few big truths steadily and whole that makes him the most important columnist in America today.” —Walter Russell Mead, The New York Times