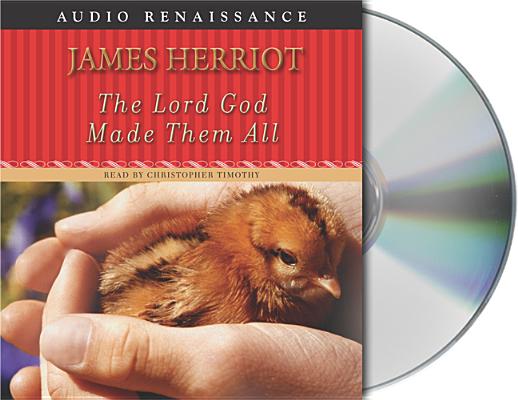 The Lord God Made Them All (All Creatures Great and Small)

Now available in unabridged CD format for the first time, The Lord God Made Them All is the bestselling sequel to All Things Wise and Wonderful and the fourth volume in James Herriot's classic collections of animal stories--the basis for the PBS Masterpiece television series, All Creatures Great and Small.

In this repackaged volume, after serving in the RAF in World War II, Herriot gladly returns home to Yorkshire to his beloved family and multitude of patients, with many more tender, funny, sad and wise stories to share with us and warm our hearts.

Animal lovers of all ages, and fans of Herriot's original classics, won't want to miss this beautiful treasure.
After serving in the Royal Air Force in World War II, James Herriot gladly returns home to Yorkshire to his beloved family and multitude of patients, with many more tender, funny, sad and wise stories to tell us. Touching our hearts with laughter and wisdom, lifting our spirits with compassion and goodness, James Herriot never fails to delight.

“This is Herriot at his best. . . able to make us laugh, cry or nod in agreement with some snippet of universal truth.” —The Washington Post

“Herriot is a spellbinder as a storyteller.” —The Seattle Times

“James Herriot is a pied piper with the written word. He eases his readers into loving, liking and laughing at familiar characters, animal and human.” —The Los Angeles Times

“A master storyteller with flawless timing.” —The Houston Post

“Herriot's book just explodes with the joy of living and loving and caring.” —The Columbus Dispatch

“A triumph in the art of storytelling, as delightful and refreshing to the mind's eye and heart as a field of bright-eyed daisies.” —Fort Worth Star-Telegram