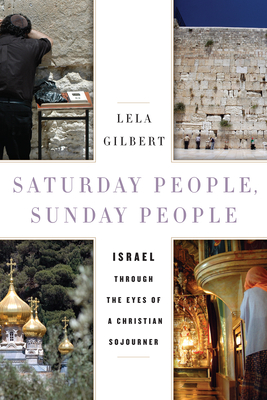 Israel Through the Eyes of a Christian Sojourner

Saturday People, Sunday People is a unique portrait of Israel as seen through the eyes of a Christian who came for a visit and has stayed on for more than six years. Long fascinated by a land that has become an abstraction centering on international conflicts of epic proportions, Lela Gilbert arrived in Israel on a personal pilgrimage in August 2006--in the midst of a raging war. What she found was a vibrant country, enlivened by warm-hearted, lively people of great intelligence and decency. Saturday People, Sunday People tells the story of the real Israel and of real Israelis--ordinary and extraordinary--and the energetic rhythm of their lives, even during times of tragedy and terror. The book interweaves a memoir of Gilbert's experiences with Israel's people and places, alongside a rich account of past and present events that continue to shape the lives of Israelis and the world beyond their borders. As she watched events unfold in the Middle East, Gilbert witnessed how the simplest facts turned into lies, from denial of the existence of a Jewish Temple in Jerusalem to the characterization of Israel's defensive border fence as "Apartheid." Then Gilbert learned of a story that had all but vanished into history: the persecution and pogroms that drove more than 850,000 Jews from Muslim lands between 1948 and 1970--the "Forgotten Refugees." Their experience is now repeating itself among Christian communities in those same Muslim countries. This cruel pattern embodies the Islamist slogan calling for the elimination of "First the Saturday people, then the Sunday people."

Lela Gilbert is a free-lance writer and editor who has authored or co-authored more than sixty published books. Her work includes Persecuted: The Global Assault on Christians (co-authored, Thomas Nelson, 2013), Blind Spot: When Journalists Don't Get Religion (co-authored, Oxford University Press, 2008), and Baroness Cox: Eyewitness to a Broken World (Lion-Hudson, 2007). She is a contributor to numerous news publications including the Jerusalem Post, The Weekly Standard, Jewish World Review, and National Review Online (NRO). An adjunct fellow at Hudson Institute, she lives in Jerusalem and California.
Loading...
or support indie stores by buying on