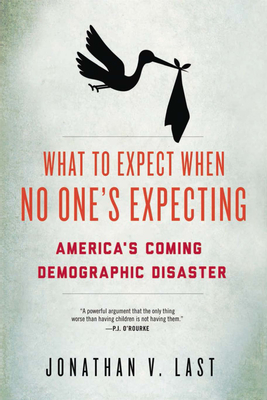 What to Expect When No One's Expecting

Look around you and think for a minute: Is America too crowded? For years, we have been warned about the looming danger of overpopulation: people jostling for space on a planet that's busting at the seams and running out of oil and food and land and everything else. It's all bunk. The "population bomb" never exploded. Instead, statistics from around the world make clear that since the 1970s, we've been facing exactly the opposite problem: people are having too few babies. Population growth has been slowing for two generations. The world's population will peak, and then begin shrinking, within the next fifty years. In some countries, it's already started. Japan, for instance, will be half its current size by the end of the century. In Italy, there are already more deaths than births every year. China's One-Child Policy has left that country without enough women to marry its men, not enough young people to support the country's elderly, and an impending population contraction that has the ruling class terrified. And all of this is coming to America, too. In fact, it's already here. Middle-class Americans have their own, informal one-child policy these days. And an alarming number of upscale professionals don't even go that far--they have dogs, not kids. In fact, if it weren't for the wave of immigration we experienced over the last thirty years, the United States would be on the verge of shrinking, too. What happened? Everything about modern life--from Bugaboo strollers to insane college tuition to government regulations--has pushed Americans in a single direction, making it harder to have children. And making the people who do still want to have children feel like second-class citizens. What to Expect When No One's Expecting explains why the population implosion happened and how it is remaking culture, the economy, and politics both at home and around the world. Because if America wants to continue to lead the world, we need to have more babies.

Jonathan V. Last is a senior writer at the Weekly Standard. His writings have been featured in the Wall Street Journal, Los Angeles Times, Washington Post, Philadelphia Inquirer, New York Post, Claremont Review of Books, First Things, The Week, Salon, Slate, TV Guide, and elsewhere. He writes a weekly column on politics, One Last Thing, for the iPad newspaper The Daily. He is a regular commentator on both television and radio and has appeared on ABC, CNN, Fox News Channel, PBS, NPR, CNBC, Sky News, and the BBC. He blogs at JonathanLast.com.
Loading...
or support indie stores by buying on