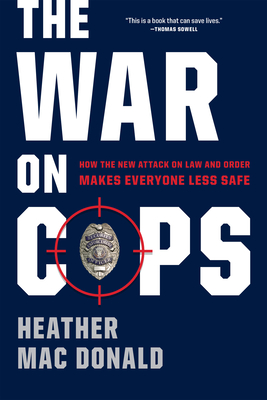 The War on Cops

Violent crime has been rising sharply in many American cities after two decades of decline. Homicides jumped nearly 17 percent in 2015 in the largest 50 cities, the biggest one-year increase since 1993. The reason is what Heather Mac Donald first identified nationally as the "Ferguson effect" Since the 2014 police shooting death of Michael Brown in Ferguson, Missouri, officers have been backing off of proactive policing, and criminals are becoming emboldened. This book expands on Mac Donald's groundbreaking and controversial reporting on the Ferguson effect and the criminal-justice system. It deconstructs the central narrative of the Black Lives Matter movement: that racist cops are the greatest threat to young black males. On the contrary, it is criminals and gangbangers who are responsible for the high black homicide death rate. The War on Cops exposes the truth about officer use of force and explodes the conceit of "mass incarceration." A rigorous analysis of data shows that crime, not race, drives police actions and prison rates. The growth of proactive policing in the 1990s, along with lengthened sentences for violent crime, saved thousands of minority lives. In fact, Mac Donald argues, no government agency is more dedicated to the proposition that "black lives matter" than today's data-driven, accountable police department. Mac Donald gives voice to the many residents of high-crime neighborhoods who want proactive policing. She warns that race-based attacks on the criminal-justice system, from the White House on down, are eroding the authority of law and putting lives at risk. This book is a call for a more honest and informed debate about policing, crime, and race.

Heather Mac Donald is the Thomas W. Smith Fellow at the Manhattan Institute and a contributing editor of City Journal. A non-practicing lawyer, Mac Donald has clerked for the Honorable Stephen Reinhardt, U.S. Court of Appeals for the Ninth Circuit, has been an attorney-adviser in the Office of the General Counsel of the U.S. Environmental Protection Agency, and a volunteer with the Natural Resources Defense Council in New York City. The New Jersey State Law Enforcement Officers Association conferred its Civilian Valor Award on her in 2004. She was awarded the 2008 Integrity in Journalism award from the New York State Shields. She was also the recipient of the 2008 Eugene Katz Award for Excellence in the Coverage of Immigration from the Center for Immigration Studies and the 2012 Quill & Badge Award for Excellence in Communication from the International Union of Police Associations. Her writings have also appeared in the Wall Street Journal, Washington Post, New York Times, The New Republic, Partisan Review, The New Criterion, Public Interest, and Academic Questions. Mac Donald received her B.A. in English from Yale University, graduating with a Mellon Fellowship to Cambridge University, where she earned her M.A. in English and studied in Italy through a Clare College study grant. Her J.D. is from Stanford University Law School.
Loading...
or
Not Currently Available for Direct Purchase