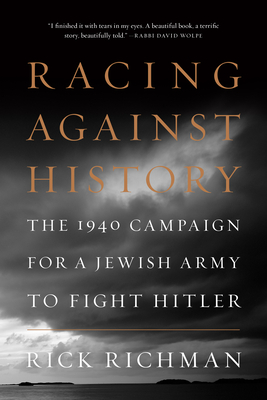 The 1940 Campaign for a Jewish Army to Fight Hitler

Racing Against History is the stunning story of three powerful personalities who sought in 1940 to turn the tide of history. David Ben-Gurion, Vladimir Jabotinsky, and Chaim Weizmann--the leaders of the left, right, and center of Zionism--undertook separate missions that year to America, then frozen in isolationism, to seek support for a Jewish army to fight Hitler. Their efforts were at once heroic and tragic. The book presents a portrait of three historic figures and the American Jewish community--at the beginning of the most consequential decade in modern Jewish history--and a cautionary tale about divisions within the Jewish community at a time of American isolationism. Based on previously unpublished materials, the book sheds new light on Zionism in America and the history of World War II, and it aims to stimulate discussion about the evolving relationship between Israel and American Jews, as the Jewish State approaches its 70th anniversary under the continuing threat of annihilation. A book for general readers, history buffs and academics alike, it includes 75 pages of End Notes that enable readers to pursue the stunning story in further depth.

Rick Richman graduated with honors from Harvard College and New York University Law School, practiced law at O'Melveny & Myers LLP for more than 30 years, and founded the Jewish Current Issues blog in 2003. His articles have appeared in Commentary, The Jewish Journal, The Jewish Press, Mosaic Magazine, The New York Sun, PJ Media, The Tower Magazine, and elsewhere, and he is the author of chapters on American Zionism and Zionist history in What America Owes the Jews, What Jews Owe America (Tobey Press, 2017) and The New War on Israel (Commentary, 2014). He was a commentator in the 2014 documentary, Body and Soul: The State of the Jewish Nation (Doc Emet Productions).
Loading...
or support indie stores by buying on