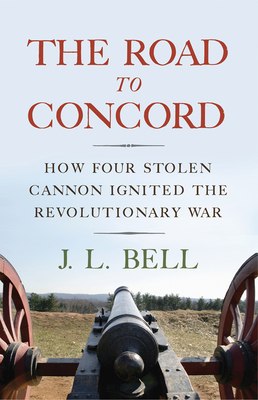 The Road to Concord

With a Clash Between American Rebels and Royal Authorities Heating Up, Radicals Smuggled Cannon Out of Boston—and the British Came Looking for Them
In the early spring of 1775, on a farm in Concord, Massachusetts, British army spies located four brass cannon belonging to Boston’s colonial militia that had gone missing months before. British general Thomas Gage had been searching for them, both to stymie New England’s growing rebellion and to erase the embarrassment of having let cannon disappear from armories under redcoat guard. Anxious to regain those weapons, he drew up plans for his troops to march nineteen miles into unfriendly territory. The Massachusetts Patriots, meanwhile, prepared to thwart the general’s mission. There was one goal Gage and his enemies shared: for different reasons, they all wanted to keep the stolen cannon as secret as possible. Both sides succeeded well enough that the full story has never appeared until now.
The Road to Concord: How Four Stolen Cannon Ignited the Revolutionary War by historian J. L. Bell reveals a new dimension to the start of America’s War for Independence by tracing the spark of its first battle back to little-known events beginning in September 1774. The author relates how radical Patriots secured those four cannon and smuggled them out of Boston, and how Gage sent out spies and search parties to track them down. Drawing on archives in the United States, United Kingdom, and Canada, the book creates a lively, original, and deeply documented picture of a society perched on the brink of war.


Praise For The Road to Concord: How Four Stolen Cannon Ignited the Revolutionary War (Journal of the American Revolution Books)…

"The strength of Bell’s work is his depth of research . . . . Historians, students of the American Revolution, and artillerists (past, present, and future) will find The Road to Concord interesting and an excellent read. Bell uncovers a piece of little-known history and provides the reader a window into the makings of the American War for Independence."—Military Review

“Here is the suspenseful story of how a handful of mechanics in 1774 smuggled Boston’s brass cannon out of town from under the noses of the British troops. J. L. Bell is a historical detective par excellence who has recovered an important, little-known episode of the onset of the American Revolution.” —Alfred F. Young, author The Shoemaker and the Tea Party: Memory and the American Revolution

“In this well-researched narrative, Mr. Bell provides an interesting twist on the usual account of the British march to Concord on April 18-19, 1775. Mr. Bell’s retelling of the story from the point of view of missing cannon demonstrates in a compelling and convincing manner why General Gage was especially anxious that his troops reach Concord.”—Patrick M. Leehey, Research Director, Paul Revere House, Boston

J. L. BELL is the proprietor of boston1775.net, a popular website dedicated to the history of the American Revolution in New England. A Fellow of the Massachusetts Historical Society and American Antiquarian Society, he is author of the National Park Service’s study of George Washington’s work in Cambridge, and has delivered papers to the Massachusetts Historical Society, the Organization of American Historians, and historic sites around greater Boston.
Loading...
or
Not Currently Available for Direct Purchase