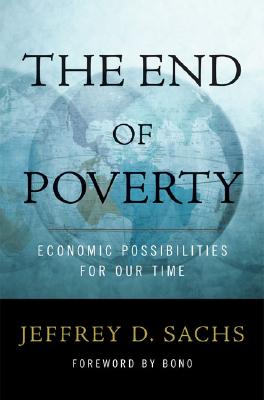 The End of Poverty (Hardcover)

He has been cited by The New York Times Magazine as "probably the most important economist in the world" and by Time as "the world's best-known economist." He has advised an extraordinary range of world leaders and international institutions on the full range of issues related to creating economic success and reducing the world's poverty and misery. Now, at last, he draws on his entire twenty-five-year body of experience to offer a thrilling and inspiring big-picture vision of the keys to economic success in the world today and the steps that are necessary to achieve prosperity for all.

Marrying vivid eyewitness storytelling to his laserlike analysis, Jeffrey Sachs sets the stage by drawing a vivid conceptual map of the world economy and the different categories into which countries fall. Then, in a tour de force of elegance and compression, he explains why, over the past two hundred years, wealth has diverged across the planet in the manner that it has and why the poorest nations have been so markedly unable to escape the cruel vortex of poverty. The groundwork laid, he explains his methods for arriving, like a clinical internist, at a holistic diagnosis of a country's situation and the options it faces. Rather than deliver a worldview to readers from on high, Sachs leads them along the learning path he himself followed, telling the remarkable stories of his own work in Bolivia, Poland, Russia, India, China, and Africa as a way to bring readers to a broad-based understanding of the array of issues countries can face and the way the issues interrelate. He concludes by drawing on everything he has learned to offer an integrated set of solutions to the interwoven economic, political, environmental, and social problems that most frequently hold societies back. In the end, he leaves readers with an understanding, not of how daunting the world's problems are, but how solvable they are-and why making the effort is a matter both of moral obligation and strategic self-interest. A work of profound moral and intellectual vision that grows out of unprecedented real-world experience, The End of Poverty is a road map to a safer, more prosperous future for the world.

From "probably the most important economist in the world" (The New York Times Magazine), legendary for his work around the globe on economies in crisis, a landmark exploration of the roots of economic prosperity and the path out of extreme poverty for the world's poorest citizens.