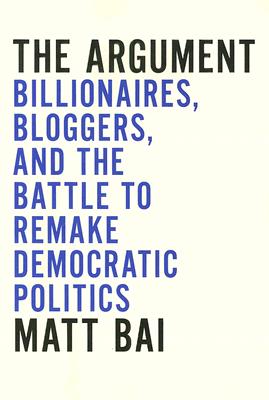 Drawing on remarkable access to myriad factions of the Democratic Party, The New York Times Magazine writer Matt Bai distills the party's future prospects and current dilemmas in this raucous and devastating account of the party's search for The Argument that fits the twenty-first century

Great political movements need more than a bunch of shared principles; they need an argument. The New Dealers had one. So did the Goldwater conservatives. So what's the progressive argument? What new path are Democrats urging us to choose in the era of Wal-Mart, Al Qaeda, and YouTube? Matt Bai seeks answers in The Argument, a book that brings you deep inside the turbulent, confusing new world of Democratic politics, where billionaires and bloggers are battling politicians and consultants over the future of a once-great party.

Beginning with the devastating election of 2004 and ending with an unexpected triumph in the 2006 congressional elections and the run-up to the 2008 campaign, Bai's book follows such memorable power brokers as Howard Dean, the billionaire George Soros, the union leader Andy Stern, the blogger Markos Moulitsas, and the leaders of moveon.org as they vie for control of the new Democratic landscape. In the pages of The Argument, we are introduced to these activists not just as political figures but as fascinating and flawed characters-ordinary people motivated by ideology or ambition or even personal tragedy.

At stake is the future of the Democratic Party and, quite possibly, of American politics itself. At a time when assorted pundits offer their own prescriptions for Democratic success in the 2008 presidential election, Bai uses rich narrative and vivid portraits to illuminate the party's challenges. In scene after scene from around the country-with union bosses in Chicago, with Dean in Alaska, with movie stars in Hollywood and financiers in New York-Bai reveals a movement that is learning how to win again, even as it struggles to articulate a compelling argument for progressive government in a confusing new century.

Readers of The Argument will recognize the unsparing insight and gift for storytelling that have made Matt Bai one of the country's most widely read observers of the American political scene-and its most trusted authority on the Democratic Party.