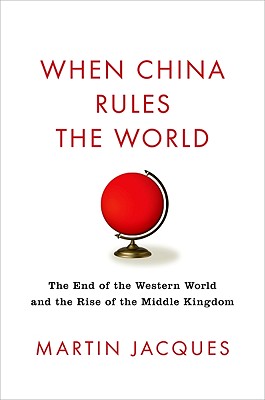 When China Rules the World (Hardcover)

How China's ascendance as an economic superpower will alter the cultural, political, social, and ethnic balance of global power in the twenty-first century, unseating the West and in the process creating a whole new world
According to even the most conservative estimates, China will overtake the United States as the world's largest economy by 2027 and will ascend to the position of world economic leader by 2050. But the full repercussions of China's ascendancy-for itself and the rest of the globe-have been surprisingly little explained or understood. In this far-reaching and original investigation, Martin Jacques offers provocative answers to some of the most pressing questions about China's growing place on the world stage.
Martin Jacques reveals, by elaborating on three historical truths, how China will seek to shape the world in its own image. The Chinese have a rich and long history as a civilization-state. Under the tributary system, outlying states paid tribute to the Middle Kingdom. Ninety-four percent of the population still believes they are one race-"Han Chinese." The strong sense of superiority rooted in China's history promises to resurface in twenty-first century China and in the process strengthen and further unify the country.
A culturally self-confident Asian giant with a billion-plus population, China will likely resist globalization as we know it. This exceptionalism will have powerful ramifications for the rest of the world and the United States in particular. As China is already emerging as the new center of the East Asian economy, the mantle of economic and, therefore, cultural relevance will in our lifetimes begin to pass from Manhattan and Paris to cities like Beijing and Shanghai. It is the American relationship with and attitude toward China, Jacques argues, that will determine whether the twenty-first century will be relatively peaceful or fraught with tension, instability, and danger.
"When China Rules the World" is the first book to fully conceive of and explain the upheaval that China's ascendance will cause and the realigned global power structure it will create.

Martin Jacques co-edited and co-authored T"he Forward March of Labour Halted?, The Politics of Thatcherism," and "New Times." Jacques co-founded the UK think-tank Demos, has been a columnist for the "Times of London," and was editor of "Marxism Today" and deputy editor of the "Independent." He currently writes a regular column for the "Guardian" and is a visiting research fellow at the London School of Economics Asia Research Centre.

Praise For When China Rules the World…

"Delivering a tour d'horizon of China's relations with foreign countries, Jacques envisions their future development as comparable to a comeback of imperial China's tributary system. Jacques' views will be discussion starters for trend-spotting students of the world scene." -Booklist