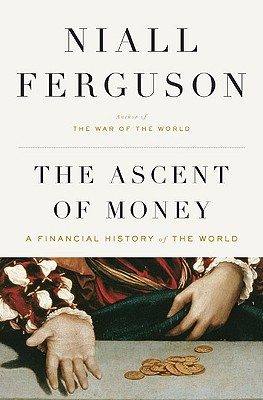 The Ascent of Money (Hardcover)

A Financial History of the World

“How did we get into the current economic mess? Niall Ferguson explains all -- from ancient Mesopotamia to the collapse of Lehman Brothers -- and in The Ascent of Money he makes financial history read like a thriller.”
— Sue Barnett, Hamish & Henry Booksellers Inc., Livingston Manor, NY
View the List

Watch the PBS program based on The Ascent of Money.

Niall Ferguson follows the money to tell the human story behind the evolution of finance, from its origins in ancient Mesopotamia to the latest upheavals on what he calls Planet Finance.
Bread, cash, dosh, dough, loot, lucre, moolah, readies, the wherewithal: Call it what you like, it matters. To Christians, love of it is the root of all evil. To generals, it's the sinews of war. To revolutionaries, it's the chains of labor. But in The Ascent of Money, Niall Ferguson shows that finance is in fact the foundation of human progress. What's more, he reveals financial history as the essential backstory behind all history.
Through Ferguson's expert lens familiar historical landmarks appear in a new and sharper financial focus. Suddenly, the civilization of the Renaissance looks very different: a boom in the market for art and architecture made possible when Italian bankers adopted Arabic mathematics. The rise of the Dutch republic is reinterpreted as the triumph of the world's first modern bond market over insolvent Habsburg absolutism. And the origins of the French Revolution are traced back to a stock market bubble caused by a convicted Scot murderer.
With the clarity and verve for which he is known, Ferguson elucidates key financial institutions and concepts by showing where they came from. What is money? What do banks do? What's the difference between a stock and a bond? Why buy insurance or real estate? And what exactly does a hedge fund do?
This is history for the present. Ferguson travels to post-Katrina New Orleans to ask why the free market can t provide adequate protection against catastrophe. He delves into the origins of the subprime mortgage crisis.
Perhaps most important, The Ascent of Money documents how a new financial revolution is propelling the world's biggest countries, India and China, from poverty to wealth in the space of a single generation an economic transformation unprecedented in human history.
Yet the central lesson of the financial history is that sooner or later every bubble bursts sooner or later the bearish sellers outnumber the bullish buyers, sooner or later greed flips into fear. And that's why, whether you re scraping by or rolling in it, there's never been a better time to understand the ascent of money.

Niall Ferguson is Laurence A. Tisch Professor of History at Harvard University, a Senior Research Fellow of Jesus College, Oxford University, and a Senior Fellow of the Hoover Institution, Stanford University. The bestselling author of Paper and Iron, The House of Rothschild, The Pity of War, The Cash Nexus, Empire, and Colossus, he also writes regularly for newspapers and magazines all over the world. Since 2003 he has written and presented three highly successful television documentary series for British television: Empire, American Colossus, and, most recently, The War of the World.
or
Not Currently Available for Direct Purchase
Copyright © 2020 American Booksellers Association