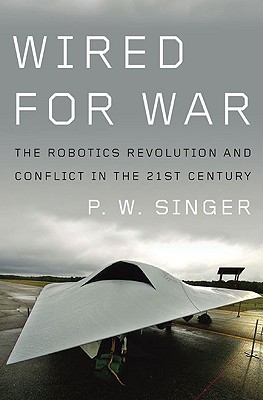 A military expert reveals how science fiction is fast becoming reality on the battlefield, changing not just how wars are fought, but also the politics, economics, laws, and ethics that surround war itself

P. W. Singer?s previous two books foretold the rise of private military contractors and the advent of child soldiers? predictions that proved all too accurate. Now, he explores the greatest revolution in military affairs since the atom bomb?the advent of robotic warfare.

We are just beginning to see a massive shift in military technology that threatens to make the stuff of I,Robot and the Terminator all too real. More than seven- thousand robotic systems are now in Iraq. Pilots in Nevada are remotely killing terrorists in Afghanistan. Scientists are debating just how smart?and how lethal?to make their current robotic prototypes. And many of the most renowned science fiction authors are secretly consulting for the Pentagon on the next generation.

Blending historic evidence with interviews from the field, Singer vividly shows that as these technologies multiply, they will have profound effects on the front lines as well as on the politics back home. Moving humans off the battlefield makes wars easier to start, but more complex to fight. Replacing men with machines may save some lives, but will lower the morale and psychological barriers to killing. The ?warrior ethos,? which has long defined soldiers? identity, will erode, as will the laws of war that have governed military conflict for generations.

Paradoxically, these new technologies will also bring war to our doorstep. As other nations and even terrorist organizations start to build or buy their own robotic weapons, the robot revolution could undermine America?s military preeminence. While his analysis is unnerving, there?s an irresistible gee-whiz quality to the innovations Singer uncovers. Wired for War travels from Iraq to see these robots in combat to the latter-day ?skunk works? in America?s suburbia, where tomorrow?s technologies of war are quietly being designed. In Singer?s hands, the future of war is as fascinating as it is frightening.

Dr Singer is considered one the world's leading experts on changes in 21st century warfare. He has written for the full range of major media and journals, including Boston Globe, L.A. Times, New Times, amongst many others. He is also the author of Corporate Warriors: The Rise of the Privatized Military Industry and Children at War. He is also a founder and organizer of the US-Islamic World Forum, a global conference that brings together leaders from across the US and the Muslim world.