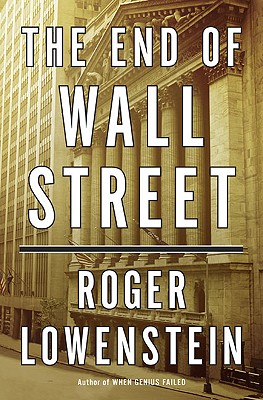 The End of Wall Street

The roots of the mortgage bubble and the story of the Wall Street collapse-and the government's unprecedented response-from our most trusted business journalist.

The End of Wall Street is a blow-by-blow account of America's biggest financial collapse since the Great Depression. Drawing on 180 interviews, including sit-downs with top government officials and Wall Street CEOs, Lowenstein tells, with grace, wit, and razor-sharp understanding, the full story of the end of Wall Street as we knew it. Displaying the qualities that made When Genius Failed a timeless classic of Wall Street-his sixth sense for narrative drama and his unmatched ability to tell complicated financial stories in ways that resonate with the ordinary reader- Roger Lowenstein weaves a financial, economic, and sociological thriller that indicts America for succumbing to the siren song of easy debt and speculative mortgages.

The End of Wall Street is rife with historical lessons and bursting with fast-paced action. Lowenstein introduces his story with precisely etched, laserlike profiles of Angelo Mozilo, the Johnny Appleseed of subprime mortgages who spreads toxic loans across the landscape like wild crabapples, and moves to a damning explication of how rating agencies helped gift wrap faulty loans in the guise of triple-A paper and a takedown of the academic formulas that-once again- proved the ruin of investors and banks. Lowenstein excels with a series of searing profiles of banking CEOs, such as the ferretlike Dick Fuld of Lehman and the bloodless Jamie Dimon of JP Morgan, and of government officials from the restless, deal-obsessed Hank Paulson and the overmatched Tim Geithner to the cerebral academic Ben Bernanke, who sought to avoid a repeat of the one crisis he spent a lifetime trying to understand-the Great Depression.

Finally, we come to understand the majesty of Lowenstein's theme of liquidity and capital, which explains the origins of the crisis and that positions the collapse of 2008 as the greatest ever of Wall Street's unlearned lessons. The End of Wall Street will be essential reading as we work to identify the lessons of the market failure and start to reb...

Praise For The End of Wall Street…

“Lowenstein, a magnificent business writer, creates an almost novelistic accounting of the all-too-real 2008 financial collapse…. Lowenstein has a pitch-perfect sense of the Street's monumental recklessness.”—Time

“[The End of Wall Street] is a complex but imaginative book… [Lowenstein] is able to identify the creative instruments of financial destruction with the directness that is all-important to a book like this.”—New York Times

“The End of Wall Street is a calm, reasoned, and often witty tour of the current financial landscape and how it got that way.”—Philadelphia Observer

“In the flood of new books about the financial crisis, Roger Lowenstein's is a standout. Lowenstein, a highly accomplished financial journalist, lays out what may be the best explanation yet of the recent crash—and as good a prediction as any on what happens next.”—Barron’s

"Lowenstein’s strong knowledge of the source material and flair for the dramatic and doomsday title should draw readers who still wonder what went wrong and how."—Publishers Weekly

“Lowenstein does a great job of explaining…in understandable terms that unobtrusively avoids the injection of emotion and politics.”—Booklist

“Over the past year, there has been a steady stream of books trying to make sense of the crisis. The latest, and perhaps the most accessible and even-handed, is Roger Lowenstein's The End of Wall Street."—Washington Post

“A veteran financial/business journalist examines the past three years of economic collapse, chronicling actions and inactions from dozens of villains and a few heroes…A well-delineated chronicle likely to cause readers to ask who put the clowns in charge of the circus, and why aren’t they confined to prison cells.” —Kirkus

Roger Lowenstein, author of the bestselling "Buffett: The Making of an American Capitalist" and "When Genius Failed: The Rise and Fall of Long-term Capital Management," reported for the "Wall Street Journal" for more than a decade and wrote the Journal's stock market column "Heard on the Street" and also its "Intrinsic Value" column. He now contributes articles and reviews to the Journal and the "New York Times Magazine" and is a columnist for "SmartMoney Magazine." He lives in Westfield, New Jersey.
Loading...
or
Not Currently Available for Direct Purchase