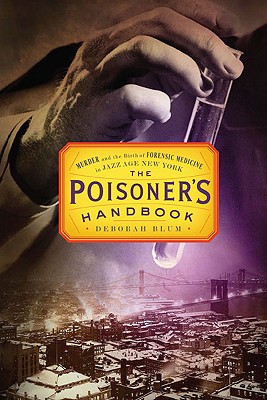 Pulitzer Prize-winning science writer Deborah Blum follows New York City's first forensic scientists to discover a fascinating Jazz Age story of chemistry and detection, poison and murder. Deborah Blum, writing with the high style and skill for suspense that is characteristic of the very best mystery fiction, shares the untold story of how poison rocked Jazz Age New York City. In The Poisoner's Handbook Blum draws from highly original research to track the fascinating, perilous days when a pair of forensic scientists began their trailblazing chemical detective work, fighting to end an era when untraceable poisons offered an easy path to the perfect crime. Drama unfolds case by case as the heroes of The Poisoner's Handbook--chief medical examiner Charles Norris and toxicologist Alexander Gettler--investigate a family mysteriously stricken bald, Barnum and Bailey's Famous Blue Man, factory workers with crumbling bones, a diner serving poisoned pies, and many others. Each case presents a deadly new puzzle and Norris and Gettler work with a creativity that rivals that of the most imaginative murderer, creating revolutionary experiments to tease out even the wiliest compounds from human tissue. Yet in the tricky game of toxins, even science can't always be trusted, as proven when one of Gettler's experiments erroneously sets free a suburban housewife later nicknamed "America's Lucretia Borgia" to continue her nefarious work. From the vantage of Norris and Gettler's laboratory in the infamous Bellevue Hospital it becomes clear that killers aren't the only toxic threat to New Yorkers. Modern life has created a kind of poison playground, and danger lurks around every corner. Automobiles choke the city streets with carbon monoxide; potent compounds, such as morphine, can be found on store shelves in products ranging from pesticides to cosmetics. Prohibition incites a chemist's war between bootleggers and government chemists while in Gotham's crowded speakeasies each round of cocktails becomes a game of Russian roulette. Norris and Gettler triumph over seemingly unbeatable odds to become the pioneers of forensic chemistry and the gatekeepers of justice during a remarkably deadly time. A beguiling concoction that is equal parts true crime, twentieth-century history, and science thriller, The Poisoner's Handbook is a page-turning account of a forgotten New York.

Pulitzer Prize winner Deborah Blum is a professor of science journalism at the University of Wisconsin. She worked as a newspaper science writer for twenty years, winning the Pulitzer in 1992 for her writing about primate research, which she turned into a book, The Monkey Wars (Oxford, 1994). Her other books include Sex on the Brain (Viking, 1997) and Love at Goon Park (Perseus, 2002). She has written about scientific research for The Los Angeles Times, The New York Times, Discover, Health, Psychology Today, and Mother Jones. She is a past president of the National Association of Science Writers and now serves on an advisory board to the World Federation of Science Journalists and the National Academy of Sciences.