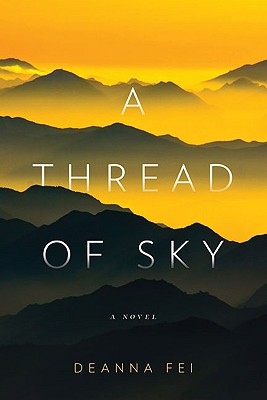 A Thread of Sky

“Lin Yulan, a revolutionary and leader of the Chinese feminist movement, reluctantly returns to her homeland after a self-imposed exile. The purpose is to join with her two daughters and three granddaughters for a guided tour of 'the new China' in an effort for the nearly estranged women to reconnect. Each woman arrives in China with her own agenda, and each discovers that some shameful secrets are simply too heavy to bear alone.”
— Emily Crowe, Odyssey Bookshop, South Hadley, MA
View the List

“Lin Yulan, a revolutionary and leader of the Chinese feminist movement, reluctantly returns to her homeland after a self-imposed exile. The purpose is to join with her two daughters and three granddaughters for a guided tour of 'the new China' in an effort for the nearly estranged women to reconnect. Each woman arrives in China with her own agenda, and each discovers that some shameful secrets are simply too heavy to bear alone. A very promising debut.”
— Emily Crowe, Odyssey Bookshop, South Hadley, MA
View the List

Looking to reconnect with their ancestral home and with one another, three generations of women tour mainland China on a journey that will change their family forever.

A stunning debut, A Thread of Sky is the story of a family of women and the powerful thread that binds their lives. In following the paths chosen by six fiercely independent women, A Thread of Sky explores the terrain we must travel to recognize the strength and vulnerability of those closest to us.

When her husband of thirty years is killed in a devastating accident, Irene Shen and her three daughters are set adrift. Nora, the eldest, retreats into her high-powered New York job and a troubled relationship. Kay, the headstrong middle child, escapes to China to learn the language and heritage of her parents. Sophie, the sensitive and artistic youngest, is trapped at home until college, increasingly estranged from her family-and herself. Terrified of being left alone with her grief, Irene plans a tour of mainland China's must sees, reuniting three generations of women-her three daughters, her distant poet sister, and her formidable eighty-year-old mother-in a desperate attempt to heal her fractured family.

If only it was so easy. Each woman arrives bearing secrets big and small, and as they travel-visiting untouched sections of the Great Wall and the seedy bars of Shanghai, the beautiful ancient temples and cold, modern shopping emporiums-they begin to wonder if they will ever find the China they seek, the one their family fled long ago.

Over days and miles they slowly find their way toward a new understanding of themselves, of one another, and of the vast complexity of their homeland, only to have their new bonds tested as never before when the darkest, most carefully guarded secret of all tumbles to the surface and threatens to tear their family apart forever. A Thread of Sky is a beautifully written and deeply haunting story about love and sacrifice, history and memory, sisterhood and motherhood, and the connections that endure.

Praise For A Thread of Sky…

"[A Thread of Sky] is one of those rare novels that delivers on the promise of its opening pages. This summer, no smart woman should leave on vacation without it."
-Conan Putnam, www.chicagotribune.com

"Timeless and of the moment... A fluent storyteller, Fei entwines this family narrative with harrowing passages about the Rape of Nanjing and the oppression of early Chinese immigrants to America".
-The New York Times Book Review

"A Thread of Sky is a lyrical journey through the heart of contemporary China, and the family of women who make the pilgrimage across these pages are as complicated, broad-ranging, and fascinating as the country itself. Deanna Fei is one to watch."
-Ann Patchett, author of Run and Bel Canto

"A Thread of Sky is a remarkable debut by a gifted young novelist. Deanna Fei is an accomplished writer with keen insight into cross-cultural Chinese- American rootlessness and the ties that bind women of several generations. A wonderful book!"
-Anita Shreve, author of A Change in Altitude

"A Thread of Sky is a dazzling, heart-pulling debut. With gorgeous lyricism and rare power, Deanna Fei maps an intricate constellation of loss and love that illuminates the lives of three generations of women. The novel is a startling achievement, braided with history and hope and deep empathy, and it introduces readers to one of the most gifted and captivating storytellers of her generation."
-Bret Anthony Johnston, author of Corpus Christi: Stories

"Deanna Fei writes gracefully and with powerful insight and feeling about love and loss, homelands and promised lands, and the various roles of women in family and society. The reader follows her passionately searching characters to China with a brimming heart, and with admiration for a first novelist so full of promise."
-Sigrid Nunez, author of The Last of Her Kind

"This had me at the first page. Fei's debut novel is both intensely enjoyable and, I think, important-this novel charts the cost of that famous Asian silence between generations, as a family takes in the price of it across several generations. But it is also an intimate portrait of that famous 'new China', as much of a surprise to Chinese-Americans as it is to the rest of us. Truly a book for our times."
-Alexander Chee, author of Edinburgh

Deanna Fei was born in Flushing, New York, and has lived in Beijing and Shanghai. A graduate of Amherst College and the Iowa Writers' workshop, she has received a Fulbright grant, a New York Foundation for the Arts fellowship, and a Chinese cultural scholarship, among other awards. She currently lives in Brooklyn, New York.
Loading...
or
Not Currently Available for Direct Purchase