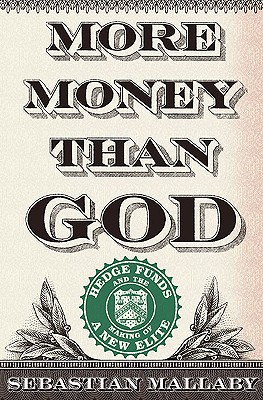 Hedge Funds and the Making of a New Elite

The first authoritative history of hedge funds-from their rebel beginnings to their role in defining the future of finance.
Based on author Sebastian Mallaby's unprecedented access to the industry, including three hundred hours of interviews, More Money Than God tells the inside story of hedge funds, from their origins in the 1960s and 1970s to their role in the financial crisis of 2007-2009.
Wealthy, powerful, and potentially dangerous, hedge fund moguls have become the It Boys of twenty-first -century capitalism. Ken Griffin of Citadel started out trading convertible bonds from his dorm room at Harvard. Julian Robertson staffed his hedge fund with college athletes half his age, then he flew them to various retreats in the Rockies and raced them up the mountains. Paul Tudor Jones posed for a magazine photograph next to a killer shark and happily declared that a 1929-style crash would be -total rock-and-roll- for him. Michael Steinhardt was capable of reducing underlings to sobs. -All I want to do is kill myself, - one said. -Can I watch?- Steinhardt responded.
Finance professors have long argued that beating the market is impossible, and yet drawing on insights from physics, economics, and psychology, these titans have cracked the market's mysteries and gone on to earn fortunes. Their innovation has transformed the world, spawning new markets in exotic financial instruments and rewriting the rules of capitalism.
More than just a history, More Money Than God is a window on tomorrow's financial system. Hedge funds have been left for dead after past financial panics: After the stock market rout of the early 1970s, after the bond market bloodbath of 1994, after the collapse of Long Term Capital Management in 1998, and yet again after the dot-com crash in 2000. Each time, hedge funds have proved to be survivors, and it would be wrong to bet against them now. Banks such as CitiGroup, brokers such as Bear Stearns and Lehman Brothers, home lenders such as Fannie Mae and Freddie Mac, insurers such as AIG, and money market funds run by giants such as Fidelity-all have failed or been bailed out. But the hedge fund industry has survived the test of 2008 far better than its rivals. The future of finance lies in the history of hedge funds.

Sebastian Mallaby has been a Washington Post columnist since 1999. From 1986 to 1999, he was on the staff of The Economist, serving in Zimbabwe, London, and Japan, and as the magazine's Washington bureau chief. He spent 2003 as a Fellow at the Council on Foreign Relations and has written for Foreign Affairs, Foreign Policy, The New York Times, and The New Republic, among others.