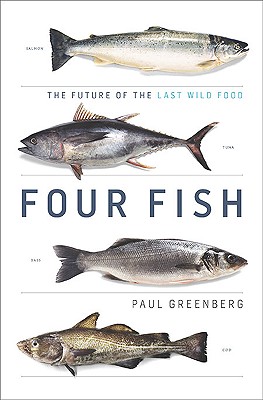 Our relationship with the ocean is undergoing a profound transformation. Whereas just three decades ago nearly everything we ate from the sea was wild, rampant overfishing combined with an unprecedented bio-tech revolution has brought us to a point where wild and farmed fish occupy equal parts of a complex and confusing marketplace. We stand at the edge of a cataclysm; there is a distinct possibility that our children's children will never eat a wild fish that has swum freely in the sea.

In Four Fish, award-winning writer and lifelong fisherman Paul Greenberg takes us on a culinary journey, exploring the history of the fish that dominate our menus---salmon, sea bass, cod and tuna-and examining where each stands at this critical moment in time. He visits Norwegian mega farms that use genetic techniques once pioneered on sheep to grow millions of pounds of salmon a year. He travels to the ancestral river of the Yupik Eskimos to see the only Fair Trade certified fishing company in the world. He investigates the way PCBs and mercury find their way into seafood; discovers how Mediterranean sea bass went global; Challenges the author of Cod to taste the difference between a farmed and a wild cod; and almost sinks to the bottom of the South Pacific while searching for an alternative to endangered bluefin tuna.

Fish, Greenberg reveals, are the last truly wild food - for now. By examining the forces that get fish to our dinner tables, he shows how we can start to heal the oceans and fight for a world where healthy and sustainable seafood is the rule rather than the exception.

Paul Greenberg is the author of the New York Times bestseller Four Fish: The Future of the Last Wild Food. Four Fish has been published throughout Europe and Asia and was picked by The New York Times, The New Yorker and Bon Appetit as a notable book of 2010. Greenberg has just completed his next work, American Catch: The Fight for Our Local Seafood (Penguin Press, June, 2014) a book that explores why the United States, the country that controls more ocean than any nation on earth imports 90 percent of its seafood from abroad. Mr. Greenberg writes regularly for the New York Times Magazine, Book Review and Opinion Page and also contributes to National Geographic, Vogue, GQ, The Times of London, Süddeutschen Zeitung, and many other publications. He has lectured widely at institutions around the country including Harvard, Yale, Google, The United States Supreme Court and The Monterey Bay Aquarium. Over the last ten years he has been a W.K. Kellogg Foundation Food and Society Policy Fellow, New York's South Street Seaport Museum's Writer-in-Residence and a fellow with the Blue Ocean Institute. He is the recipient of a James Beard Award for Writing and Literature, and a Grantham Prize Award of Special Merit. In 2014 he began a three year Pew Fellowship in Marine Conservation during which he will write "The Omega Principle: The health of our hearts, the strength of our minds, and the survival of our oceans all in one little pill."