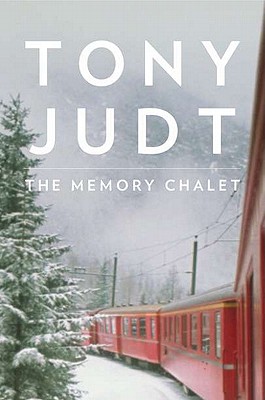 A New York Times Book Review Notable Book of the Year "It might be thought the height of poor taste to ascribe good fortune to a healthy man with a young family struck down at the age of sixty by an incurable degenerative disorder from which he must shortly die. But there is more than one sort of luck. To fall prey to a motor neuron disease is surely to have offended the Gods at some point, and there is nothing more to be said. But if you must suffer thus, better to have a well-stocked head." -Tony Judt The Memory Chalet is a memoir unlike any you have ever read before. Each essay charts some experience or remembrance of the past through the sieve of Tony Judt's prodigious mind. His youthful love of a particular London bus route evolves into a reflection on public civility and interwar urban planning. Memories of the 1968 student riots of Paris meander through the divergent sex politics of Europe, before concluding that his generation "was a revolutionary generation, but missed the revolution." A series of road trips across America lead not just to an appreciation of American history, but to an eventual acquisition of citizenship. Foods and trains and long-lost smells all compete for Judt's attention; but for us, he has forged his reflections into an elegant arc of analysis. All as simply and beautifully arranged as a Swiss chalet-a reassuring refuge deep in the mountains of memory.

Tony Judt was the Erich Maria Remarque Professor of European Studies at New York University, as well as the founder and director of the Remarque Institute, dedicated to creating an ongoing conversation between Europe and the United States. He was educated at King's College, Cambridge, and the Ecole Normale Superieure, Paris, and also taught at Cambridge, Oxford, and Berkeley.Professor Judt was a frequent contributor to The New York Review of Books, The Times Literary Supplement, The New Republic, The New York Times, and many journals across Europe and the United States. He is the author or editor of fifteen books, including Thinking the Twentieth Century, The Memory Chalet, Ill Fares the Land, Reappraisals: Reflections on the Forgotten Twentieth Century, and Postwar: A History of Europe Since 1945, which was one of The New York Times Book Review's Ten Best Books of 2005, the winner of the Council on Foreign Relations Arthur Ross Book Award, and a finalist for the Pulitzer Prize. He died in August 2010 at the age of sixty-two.
Loading...
or
Not Currently Available for Direct Purchase