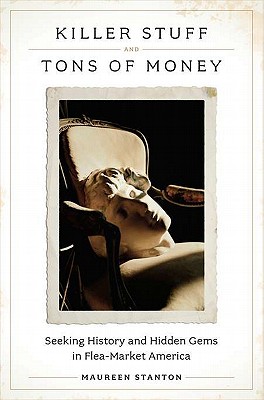 One dealer's journey from the populist mayhem of flea markets to the rarefied realm of auctions reveals the rich, often outrageous subculture of antiques and collectibles.
Millions of Americans are drawn to antiques and flea-market culture, whether as participants or as viewers of the perennially popular "Antiques Roadshow" or the recent hit "American Pickers." This world has the air of a lottery: a $20 purchase might net you four, five, or six figures. Master dealer Curt Avery, the unlikely star of "Killer Stuff and Tons of Money," plays that lottery every day, and he wins it more than most. Occasionally he gets lucky, but more often, he draws on a deep knowledge of America's past and the odd, fascinating, and beautiful objects that have survived it.
Week in, week out, Avery trawls the flea and antiques circuit-buying, selling, and advising other dealers in his many areas of expertise, from furniture to glass to stoneware, and more. On the surface, he's an improbable candidate for an antiques dealer. He wrestled in high school and still retains the pugilistic build; he is gruff, funny, and profane; he favors shorts and sneakers, even in November; and he is remarkably generous toward both competitors and customers who want a break.
But as he struggles for a spot in a high-end Boston show, he must step up his game and, perhaps more challenging, fit in with a white-shoe crowd. Through his ascent, we see the flea-osphere for what it truly is-less a lottery than a contact sport with few rules and many pitfalls. This rich and sometimes hilarious subculture rewards peculiar interests and outright obsessions-one dealer specializes in shrunken heads; another wants all the postal memorabilia he can get. So Avery must be a guerrilla historian and use his hard-earned knowledge of America's past to live by and off his wits. Only the smartest survive in one of America's most ruthless meritocracies.
"Killer Stuff and Tons of Money" is many things: an insider's look at a subculture replete with arcane traditions and high drama, an inspiring account of a self-made man making his way in a cutthroat field, a treasure trove of tips for those who seek out old things themselves, and a thoroughly fresh, vibrant view of history as blood sport.

Maureen Stanton s writing has appeared in "Creative Nonfiction," "Fourth Genre," "River Teeth, The Florida Review," "Crab Orchard Review," "The Sun," and many other journals, as well as several anthologies including "Best of The Sun," "Best of Brevity," and "Best Texas Writing." Five of her essays were listed as Notable Essays in "Best American Essays" series. She is the recipient of numerous awards, including a Pushcart Prize, a National Endowment for the Arts Literature Fellowship, a MacDowell Colony Fellowship, the "Iowa Review" nonfiction award, and the "American Literary Review" nonfiction prize. She currently teaches creative nonfiction at the University of Missouri."
or
Not Currently Available for Direct Purchase
Copyright © 2020 American Booksellers Association