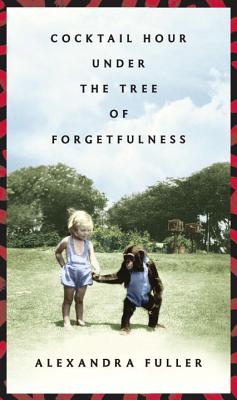 Cocktail Hour Under the Tree of Forgetfulness

In Cocktail Hour Under the Tree of Forgetfulness Alexandra Fuller returns to Africa and to her unforgettable family, whom readers first met in Don't Let's Go to the Dogs Tonight. At the heart of this family, and central to the lifeblood of her latest story, is Fuller’s iconically courageous mother, Nicola (or, Nicola Fuller of Central Africa, as she sometimes prefers to be known). Born on the Scottish Isle of Skye to a warlike clan of highlanders and raised in Kenya's perfect equatorial light, Nicola holds dear the values most likely to get you hurt or killed in Africa: loyalty to blood, passion for land, and a holy belief in the restorative power of all animals. With a lifetime of admiration behind her and after years of interviews and research, Fuller has recaptured her mother's inimitable voice with remarkable precision. Cocktail Hour Under the Tree of Forgetfulness is as funny, exotic, terrifying and unselfconscious as Nicola herself.

We see Nicola as an irrepressible child in western Kenya, then with the man who fell in love with her, Tim Fuller.  The young couple begin their life in a lavender colored honeymoon period, when east Africa lies before them with all the promise of its liquid honeyed light, even as the British empire in which they both once believed wanes. But in short order, an accumulation of mishaps and tragedies bump up against history until the Fullers find themselves in a world they hardly recognize. We follow Tim and Nicola as they hopscotch the continent, restlessly trying to establish a home, from Kenya to Rhodesia to Zambia, even returning to England briefly. War, hardship and tragedy seem to follow the family even as Nicola fights to hold onto her children, her land, her sanity.  But just when it seems that Nicola has been broken by the continent she loves, it is the African earth  - and Tim's acceptance of her love for this earth - that revives and nurtures her.

Alexandra Fuller is also the author of the forthcoming novel, Quiet Until the Thaw.


Praise For Cocktail Hour Under the Tree of Forgetfulness…

“Electrifying…Writing in shimmering, musical prose… Ms. Fuller manages the difficult feat of writing about her mother and father with love and understanding, while at the same time conveying the terrible human costs of the colonialism they supported… Although Ms. Fuller would move to America with her husband in 1994, her own love for Africa reverberates throughout these pages, making the beauty and hazards of that land searingly real for the reader.”
—Michiko Kakutani, THE NEW YORK TIMES

“Ten years after publishing Don’t Let’s Go to the Dogs Tonight: An African Childhood, Alexandra (Bobo) Fuller treats us in this wonderful book to the inside scoop on her glamorous, tragic, indomitable mother…Bobo skillfully weaves together the story of her romantic, doomed family against the background of her mother’s remembered childhood.”
—THE WASHINGTON POST

“Another stunner… The writer's finesse at handling the element of time is brilliant, as she interweaves near-present-day incidents with stories set in the past. Both are equally vivid… With "Cocktail Hour Under the Tree of Forgetfulness" Alexandra Fuller, master memoirist, brings her readers new pleasure. Her mum should be pleased.”
—CLEVELAND PLAIN-DEALER

“Fuller's narrative is a love story to Africa and her family. She plumbs her family story with humor, memory, old photographs and a no-nonsense attitude toward family foibles, follies and tragedy. The reader is rewarded with an intimate family story played out against an extraordinary landscape, told with remarkable grace and style.”
—MINNEAPOLIS STAR-TRIBUNE

“[Fuller] conveys the magnetic pull that Africa could exert on the colonials who had a taste for it, the powerful feeling of attachment. She does not really explain that feeling—she is a writer who shows rather than tells—but through incident and anecdote she makes its effects clear, and its costs.”
—THE WALL STREET JOURNAL

“An eccentric, quixotic and downright dangerous tale with full room for humor, love and more than a few highballs.”
—HUFFINGTON POST

“Cocktail Hour [Under the Tree of Forgetfulness] subtly explores the intersections of personality, history, and landscape in ways that are continually fresh and thoughtful.”
—CHARLESTON POST AND COURIER

“Gracefully recounted using family recollections and photos, the author plumbs the narrative with a humane and clear-eyed gaze—a lush story, largely lived within a remarkable place and time.”
—KIRKUS REVIEWS

“In this sequel to her 2001 memoir, Don’t Let’s Go to the Dogs Tonight, which her unflattered mum calls the ‘Awful Book,’ Duller gives a warm yet wry account of her British parents’ arduous life in Africa. . . . With searing honesty and in blazingly vibrant prose, Fuller re-creates her mother’s glorified Kenyan girlhood and visits her forever-wild parents at their Zambian banana and fish farm today. The result is an entirely Awesome Book.”
—MORE MAGAZINE

“Fuller brings Africa to life, both its natural splendor and the harsher realities of day-to-day existence, and sheds light on her parents in all their humanness—not a glaring sort of light, but the soft equatorial kind she so beautifully describes in this memoir.”
—BOOKPAGE

“Fuller revisits her vibrant, spirited parents, first introduced in Don’t Let’s Go to the Dogs Tonight (2001), which her mother referred to as that ‘awful book’. . . . This time around, Nicola is well aware her daughter is writing another memoir, and shares some of her memories under the titular Tree of Forgetfulness, which looms large by the elder Fullers’ house in Zambia. Fuller’s prose is so beautiful and so evocative that readers will feel that they, too, are sitting under that tree. A gorgeous tribute to both her parents and the land they love.”
—BOOKLIST (starred review)

“A sardonic follow-up to her first memoir about growing up in Rhodesia circa the 1970s, Don’t Let’s Go to the Dogs Tonight, this work traces in wry, poignant fashion the lives of her intrepid British parents. . . . Fuller achieves another beautifully wrought memoir.”
—PUBLISHERS WEEKLY (starred review)

Alexandra Fuller was born in England in 1969. In 1972, she moved with her family to a farm in southern Africa. She lived in Africa until her midtwenties. In 1994, she moved to Wyoming.
Loading...
or
Not Currently Available for Direct Purchase