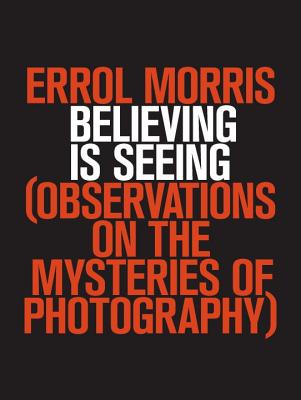 Observations on the Mysteries of Photography

Selected by "The New York Times Book Review" as a Notable Book of the Year Academy Award-wining filmmaker Errol Morris investigates the hidden truths behind a series of documentary photographs.
In "Believing Is Seeing" Academy Award-winning director Errol Morris turns his eye to the nature of truth in photography. In his inimitable style, Morris untangles the mysteries behind an eclectic range of documentary photographs, from the ambrotype of three children found clasped in the hands of an unknown soldier at Gettysburg to the indelible portraits of the WPA photography project. Each essay in the book presents the reader with a conundrum and investigates the relationship between photographs and the real world they supposedly record.
During the Crimean War, Roger Fenton took two nearly identical photographs of the Valley of the Shadow of Death-one of a road covered with cannonballs, the other of the same road without cannonballs. Susan Sontag later claimed that Fenton posed the first photograph, prompting Morris to return to Crimea to investigate. Can we recover the truth behind Fenton's intentions in a photograph taken 150 years ago?
In the midst of the Great Depression and one of the worst droughts on record, FDR's Farm Service Administration sent several photographers, including Arthur Rothstein, Dorothea Lange, and Walker Evans, to document rural poverty. When Rothstein was discovered to have moved the cow skull in his now-iconic photograph, fiscal conservatives-furious over taxpayer money funding an artistic project-claimed the photographs were liberal propaganda. What is the difference between journalistic evidence, fine art, and staged propaganda?
During the Israeli-Lebanese war in 2006, no fewer than four different photojournalists took photographs in Beirut of toys lying in the rubble of bombings, provoking accusations of posing and anti-Israeli bias at the news organizations. Why were there so many similar photographs? And were the accusers objecting to the photos themselves or to the conclusions readers drew from them?
With his keen sense of irony, skepticism, and humor, Morris reveals in these and many other investigations how photographs can obscure as much as they reveal and how what we see is often determined by our beliefs. Part detective story, part philosophical meditation, "Believing Is Seeing" is a highly original exploration of photography and perception from one of America's most provocative observers.

Errol Morris is a world-renowned filmmaker-the Academy Award- winning director of "The Fog of War" and the recipient of a MacArthur "Genius" Award. His other films include "Standard Operating Procedure; Mr. Death; Fast, Cheap, and Out of Control; A Brief History of Time"; and "The Thin Blue Line."
Loading...
or
Not Currently Available for Direct Purchase