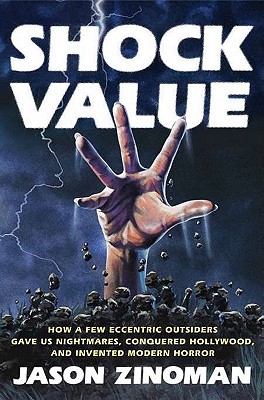 An enormously entertaining account of the gifted and eccentric directors who gave us the golden age of modern horror in the 1970s, bringing a new brand of politics and gritty realism to the genre.
Much has been written about the storied New Hollywood of the 1970s, but at the same time as Martin Scorsese, Steven Spielberg, and Francis Ford Coppola were making their first classic movies, a parallel universe of directors gave birth to the modern horror film-aggressive, raw, and utterly original. Based on unprecedented access to the genre's major players, "The New York Times"'s critic Jason Zinoman's "Shock Value" delivers the first definitive account of horror's golden age.
By the late 1960s, horror was stuck in the past, confined mostly to drive-in theaters and exploitation houses, and shunned by critics. "Shock Value" tells the unlikely story of how the much-disparaged horror film became an ambitious art form while also conquering the multiplex. Directors such as Wes Craven, Roman Polanski, John Carpenter, and Brian De Palma- counterculture types operating largely outside the confines of Hollywood-revolutionized the genre, exploding taboos and bringing a gritty aesthetic, confrontational style, and political edge to horror. Zinoman recounts how these directors produced such classics as "Rosemary's Baby, Carrie, The Texas Chainsaw Massacre," and "Halloween," creating a template for horror that has been imitated relentlessly but whose originality has rarely been matched.
This new kind of film dispensed with the old vampires and werewolves and instead assaulted audiences with portraits of serial killers, the dark side of suburbia, and a brand of nihilistic violence that had never been seen before. "Shock Value" tells the improbable stories behind the making of these movies, which were often directed by obsessive and insecure young men working on shoestring budgets, were funded by sketchy investors, and starred porn stars. But once "The Exorcist" became the highest grossing film in America, Hollywood took notice.
The classic horror films of the 1970s have now spawned a billion-dollar industry, but they have also penetrated deep into the American consciousness. Quite literally, Zinoman reveals, these movies have taught us what to be afraid of. Drawing on interviews with hundreds of the most important artists in horror, "Shock Value" is an enthralling and personality-driven account of an overlooked but hugely influential golden age in American film.

Jason Zinoman is a critic and reporter covering theater for "The New York Times." He has also regularly written about movies, television, books and sports for publications such as "Vanity Fair," "The Guardian "and "Slate." He was the chief theater critic for "Time Out New York "before leaving to write the On Stage and Off column in the Weekend section of the "Times." He grew up in Washington D.C. and now lives in Brooklyn.