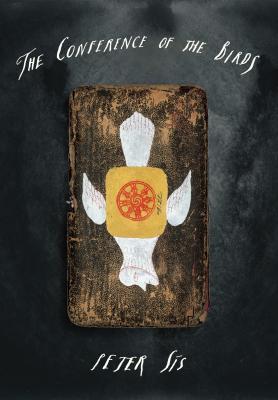 The Conference of the Birds

Celebrated children's book author and illustrator Peter Sis creates his first book for adults, a beautiful and uplifting adaptation of the classic twelfth-century Sufi epic poem, The Conference of the Birds.

Sis's deeply felt adaptation tells the story of an epic flight of birds in search of the true king, Simorgh. Drawn from all species, the band of birds is led by the hoopoe. He promises that the voyage to the mountain of Kaf, where Simorgh lives, will be perilous and many birds resist, afraid of what they might encounter. Others perish during the passage through the seven valleys: quest, love, understanding, friendship, unity, amazement, and death.

Those that continue reach the mountain to learn that Simorgh the king is, in fact, each of them and all of them. In this lyrical and richly illustrated story of love, faith, and the meaning of it all, Peter Sis shows the pain, and beauty, of the human journey.

Peter Sis is an internationally acclaimed illustrator, author, and filmmaker. Born in Brno, Czechoslovakia in 1949, he began his film career by winning the Golden Bear Award at the 1980 West Berlin Film Festival for an animated short. His film work is now in the permanent collection of the Museum of Modern Art in New York. He turned to publishing in 1984 and quickly became one of the leading artists in the field. With more than twenty books to his credit and almost as many honors, Peter is a seven-time winner of The New York Times Book Review Best Illustrated Book of the Year. Most recently, in 2007, he published The Wall: Growing up Behind the Iron Curtain, which was awarded the Robert F. Sibert Medal and was also named a Caldecott Honor Book. Peter Sis was named a MacArthur Fellow in 2003. He lives in the New York City area with his wife and children."
Loading...
or
Not Currently Available for Direct Purchase