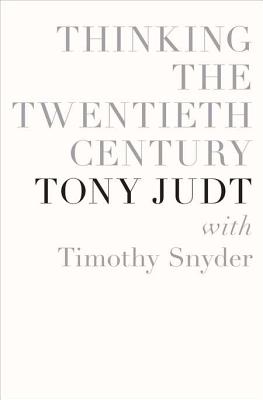 "Ideas crackle" in this triumphant final book of Tony Judt, taking readers on "a wild ride through the ideological currents and shoals of 20th century thought.” (Los Angeles Times)

The final book of the brilliant historian and indomitable public critic Tony Judt, Thinking the Twentieth Century maps the issues and concerns of a turbulent age on to a life of intellectual conflict and engagement.

The twentieth century comes to life as an age of ideas--a time when, for good and for ill, the thoughts of the few reigned over the lives of the many. Judt presents the triumphs and the failures of prominent intellectuals, adeptly explaining both their ideas and the risks of their political commitments.  Spanning an era with unprecedented clarity and insight, Thinking the Twentieth Century is a tour-de-force, a classic engagement of modern thought by one of the century’s most incisive thinkers.

The exceptional nature of this work is evident in its very structure--a series of intimate conversations between Judt and his friend and fellow historian Timothy Snyder, grounded in the texts of the time and focused by the intensity of their vision.  Judt's astounding eloquence and range are here on display as never before.  Traversing the complexities of modern life with ease, he and Snyder revive both thoughts and thinkers, guiding us through the debates that made our world. As forgotten ideas are revisited and fashionable trends scrutinized, the shape of a century emerges.  Judt and Snyder draw us deep into their analysis, making us feel that we too are part of the conversation. We become aware of the obligations of the present to the past, and the force of historical perspective and moral considerations in the critique and reform of society, then and now.

Praise For Thinking the Twentieth Century…

"There are so many ways that Thinking the Twentieth Century is a remarkable book. The lifetime of scholarship and intellectual engagement lying behind that verb "thinking" in the title. The way ideas crackle in the interplay between the authors. The passionate involvement with issues political and controversial. That the book could have been written at all, given the tragic circumstances surrounding it... Judt proceeds to take the reader on a wild ride through the ideological currents and shoals of 20th century thought."
—The Los Angeles Times
-THE LOS ANGELES TIMES

“Fans will find plenty to sustain them in this poignant coda to a life marked by great feats of penmanship, scholarly insight and contemporary polemic… [Judt’s] bravery is ever-present, but rightly understated. As Mr Snyder notes in his introduction, the book is both about the life of the mind and a mindful life. Judt exemplified both.”
—The Economist
-THE ECONOMIST

“Judt was a provocateur, but maybe an accidental one, and after reading this remarkable, impassioned book, it's hard to doubt his sincerity… Thinking the Twentieth Century is Judt's final salvo against what he saw as a culture of historical ignorance and political apathy, and it's every bit as brilliant, uncompromising and original as he was.”
—NPR
-NPR.org

Tony Judt is the author or editor of fifteen books, including "The Memory Chalet" and "Postwar," which was a finalist for the Pulitzer Prize. He was University Professor at New York University and the founder of the Remarque Institute. He died in August 2010 at the age of sixty-two.

Timothy Snyder is Professor of History at Yale University and the author of five award-winning books, most recently "Bloodlands: Europe Between Hitler and Stalin."
or
Not Currently Available for Direct Purchase