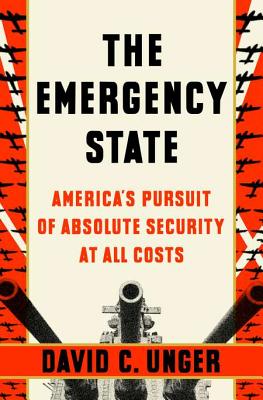 America's Pursuit of Absolute Security at All Costs

Editor's Choice, NEW YORK TIMES BOOK REVIEW
Ambitious and valuable --WASHINGTON POST
America is trapped in a state of war that has consumed our national life since before Pearl Harbor. Over seven decades and several bloody wars, Democratic and Republican politicians alike have assembled an increasing complicated and increasingly ineffective network of security services. Trillions of tax dollars have been diverted from essential domestic needs while the Pentagon created a worldwide web of military bases, inventing new American security interests where none previously existed. Yet this pursuit has not only damaged our democratic institutions and undermined our economic strength it has fundamentally failed to make us safer.

In "The Emergency State," senior "New York Times" journalist David C. Unger reveals the hidden costs of America's obsessive pursuit of absolute national security, showing how this narrow-minded emphasis on security came to distort our political life. Unger reminds us that in the first 150 years of the American republic the U.S. valued limited military intervention abroad, along with the checks and balances put in place by the founding fathers. Yet American history took a sharp turn during and just after World War II, when we began building a vast and cumbersome complex of national security institutions and beliefs. Originally designed to wage hot war against Germany and cold war against the Soviet Union, our security bureaucracy has become remarkably ineffective at confronting the elusive, non-state sponsored threats we now face.

"The Emergency State" traces a series of missed opportunities from the end of World War II to the election of Barack Obama when we could have paused to rethink our defense strategy and didn t. We have ultimately failed to dismantle our outdated national security state because both parties are equally responsible for its expansion. While countless books have exposed the damage wrought by George W. Bush's "war on terror," Unger shows it was only the natural culmination of decades of bipartisan emergency state logic and argues that Obama, along with many previous Democratic presidents, has failed to shift course in any meaningful way.

"The Emergency State: America's Pursuit of Absolute Security At All Costs" reveals the depth of folly into which we ve fallen, as Americans eagerly trade away the country's greatest strengths for a fleeting illusion of safety. Provocative, insightful, and refreshingly nonpartisan, "The Emergency State "is the definitive untold story of how America became this vulnerable and how it can build true security again.

DAVID C. UNGER has been an editorial writer at "The New York Times "for more than thirty years where he writes about foreign policy, international economics, and military issues--and a member of the paper s Editorial Board for twenty-two years. He is a member of the Council on Foreign Relations, and teaches courses in American Foreign Policy at the Bologna Center of The Johns Hopkins University Nitze School of Advanced International Studies."
or
Not Currently Available for Direct Purchase
Copyright © 2020 American Booksellers Association