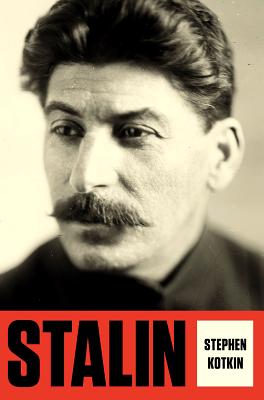 It has the quality of myth: a poor cobbler’s son, a seminarian from an oppressed outer province of the Russian empire, reinvents himself as a top leader in a band of revolutionary zealots. When the band seizes control of the country in the aftermath of total world war, the former seminarian ruthlessly dominates the new regime until he stands as absolute ruler of a vast and terrible state apparatus, with dominion over Eurasia. While still building his power base within the Bolshevik dictatorship, he embarks upon the greatest gamble of his political life and the largest program of social reengineering ever attempted: the collectivization of all agriculture and industry across one sixth of the earth. Millions will die, and many more millions will suffer, but the man will push through to the end against all resistance and doubts.

Where did such power come from?  In Stalin, Stephen Kotkin offers a biography that, at long last, is equal to this shrewd, sociopathic, charismatic dictator in all his dimensions. The character of Stalin emerges as both astute and blinkered, cynical and true believing, people oriented and vicious, canny enough to see through people but prone to nonsensical beliefs. We see a man inclined to despotism who could be utterly charming, a pragmatic ideologue, a leader who obsessed over slights yet was a precocious geostrategic thinker—unique among Bolsheviks—and yet who made egregious strategic blunders. Through it all, we see Stalin’s unflinching persistence, his sheer force of will—perhaps the ultimate key to understanding his indelible mark on history.

Stalin gives an intimate view of the Bolshevik regime’s inner geography of power, bringing to the fore fresh materials from Soviet military intelligence and the secret police. Kotkin rejects the inherited wisdom about Stalin’s psychological makeup, showing us instead how Stalin’s near paranoia was fundamentally political, and closely tracks the Bolshevik revolution’s structural paranoia, the predicament of a Communist regime in an overwhelmingly capitalist world, surrounded and penetrated by enemies. At the same time, Kotkin demonstrates the impossibility of understanding Stalin’s momentous decisions outside of the context of the tragic history of imperial Russia.

The product of a decade of intrepid research, Stalin is a landmark achievement, a work that recasts the way we think about the Soviet Union, revolution, dictatorship, the twentieth century, and indeed the art of history itself.

The New York Times Book Review:
“Masterly…. Kotkin offers the sweeping context so often missing from all but the best biographies.  In his introductory chapter he makes the lofty assertion that a history if Stalin Is akin to “a history of the world”… and he delivers not only a history of the late imperial Russia and of the revolution and early Soviet state, but also frequent commentary on the global geopolitics at play. [Stalin] presents a riveting tale, written with pace and aplomb.  Kotkin has given us a textured, gripping examination of the foundational years of the man most responsible for the construction of the Soviet state in all its brutal glory.  The first volume leaves the reader longing for the story still to come.”

Richard Pipes, The New York Review of Books:
“This is a very serious biography that… is likely to well stand the test of time.”

New Statesman (UK):
“[Kotkin’s] viewpoint is godlike: all the world falls within his purview. He makes comparisons across decades and continents.... An exhilarating ride.”

“An exceptionally ambitious biography… Kotkin builds the case for quite a different interpretation of Stalin—and for quite a few other things, too. The book’s signature achievement… is its vast scope: Kotkin has set out to write not only the definitive life of Stalin but also the definitive history of the collapse of the Russian empire and the creation of the new Soviet empire in its place.”

The American Scholar:
“Magnificent and magisterial, Kotkin’s study sheds unexpected light on all sorts of thorny problems…. [T]he narrative is not only profound but thrilling.”

Robert Gellately, Times Higher Education (London):
“A brilliant portrait of a man of contradictions... In the vast literature on the Soviet Union, there is no study to rival Stephen Kotkin’s massive first instalment of a planned three-volume biography of Joseph Stalin. When it is complete, it will surely become the standard work, and I heartily recommend it.”

John Thornhill, Financial Times:
"It is a measure of Kotkin’s powers of research and explanation that Stalin’s decisions can almost always be understood within the framework of his ideology and the context of his times.... With a ferocious determination worthy of his subject, the author debunks many of the myths to have encrusted themselves around Stalin.... [A] magnificent biography. This reviewer, at least, is already impatient to read the next two volumes for their author’s mastery of detail and the swagger of his judgments.”

David Johnson, Johnson’s Russia List:
“Required reading for serious Russia-watchers... As the product of years of work and careful thought, it is for me a reminder of what it takes to get close to the truth about important and controversial subjects. And the distance and time required to do so.”

Geoffrey Roberts, Irish Examiner:
“Monumental... For Kotkin it was not Stalin’s personality that drove his politics but his politics that shaped his personality. His research, narrative and arguments are as convincing as they are exhaustive. The book is long but very readable and highly accessible to the general reader.... Magisterial.”

Donald Rayfield, Literary Review:
"Masterful... No other work on Stalin incorporates so well the preliminary information needed by the general reader, yet challenges so thoroughly the specialist's preconceptions. Kotkin has chosen illustrations, many of them little known, which reveal the crippled psyches of his dramatis personae.”

Booklist (starred):
“An ambitious, massive, highly detailed work that offers fresh perspectives on the collapse of the czarist regime, the rise of the Bolsheviks, and the seemingly unlikely rise of Stalin to total power over much of the Eurasian land mass....This is an outstanding beginning to what promises to be a definitive work on the Stalin era.”

Kirkus Reviews (starred):
“Authoritative and rigorous…. Staggeringly wide in scope, this work meticulously examines the structural forces that brought down one autocratic regime and put in place another.”

Publishers Weekly:
“This is an epic, thoroughly researched account that presents a broad vision of Stalin, from his birth to his rise to absolute power.”

Library Journal:
“Kotkin has been researching his magisterial biography of Stalin for a decade. Inescapably important reading.”

John Lewis Gaddis, Yale University; author of George F. Kennan: A Life, winner of the 2012 Pulitzer Prize for Biography:
“In its size, sweep, sensitivity, and surprises, Stephen Kotkin’s first volume on Stalin is a monumental achievement: the early life of a man we thought we knew, set against the world—no less—that he inhabited. It’s biography on an epic scale. Only Tolstoy might have matched it.”

William Taubman, Professor of Political Science Emeritus, Amherst College; author of Khrushchev: The Man and his Era, winner of the 2004 Pulitzer Prize for Biography
“Stalin has had more than his fair share of biographies. But Stephen Kotkin’s wonderfully broad-gauged work surpasses them all in both breadth and depth, showing brilliantly how the man, the time, the place, its history, and especially Russian/Soviet political culture, combined to produce one of history’s greatest evil geniuses.”

David Halloway, Raymond A. Spruance Professor of International History, Stanford University; author of Stalin and the Bomb:
“Stephen Kotkin’s first volume on Stalin is ambitious in conception and masterly in execution. It provides a brilliant account of Stalin’s formation as a political actor up to his fateful decision to collectivize agriculture by force. Kotkin combines biography with historical analysis in a way that brings out clearly Stalin's great political talents as well as the ruthlessness with which he applied them and the impact his policies had on Russia and the world. This is a magisterial work on the grandest scale.”

Strobe Talbott, president of the Brookings Institution:
“More than any of Stalin’s previous biographers, Stephen Kotkin humanizes one of the great monsters of history, thereby making the monstrosity more comprehensible than it has been before. He does so by sticking to the facts—many of them fresh, all of them marshalled into a gripping, fine-grained story.”

The Sunday Times (London):
“Staggeringly researched, exhaustively thorough... Kotkin has no patience for the idea that Stalin... was a madman or a monster. His personality and crimes, Kotkin thinks, are only explicable in the wider contexts of Russian imperial history and Marxist theory. So this is less a conventional biography than a colossal life and times.... Hugely impressive.”

Sheila Fitzpatrick, The Guardian:
“Unlike a number of Stalin studies, this is not an etiology of evil. The author does not appear to be watching his subject narrowly for early signs of the monstrous deformations that will later emerge. He tries to look at him at various stages of his career without the benefit of too much hindsight.... [Kotkin] is an engaging interlocutor with a sharp, irreverent wit... making the book a good read as well as an original and largely convincing interpretation of Stalin that should provoke lively arguments in the field.”

Stephen Kotkin is the John P. Birkelund Professor in History and International Affairs at Princeton University. He is also a fellow at the Hoover Institution at Stanford University. He directs Princeton's Institute for International and Regional Studies and co-directs its Program in the History and Practice of Diplomacy. His books include Uncivil Society, Armageddon Averted, and Magnetic Mountain. Kotkin was a Pultizer Prize finalist for Stalin: Volume I: Paradoxes of Power, 1878-1928.
Loading...
or
Not Currently Available for Direct Purchase