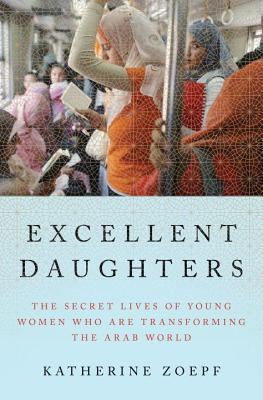 For more than a decade, Katherine Zoepf has lived in or traveled throughout the Arab world, reporting on the lives of women, whose role in the region has never been more in flux. Only a generation ago, female adolescence as we know it in the West did not exist in the Middle East. There were only children and married women. Today, young Arab women outnumber men in universities, and a few are beginning to face down religious and social tradition in order to live independently, to delay marriage, and to pursue professional goals. Hundreds of thousands of devout girls and women are attending Qur’anic schools—and using the training to argue for greater rights and freedoms from an Islamic perspective. And, in 2011, young women helped to lead antigovernment protests in the Arab Spring. But their voices have not been heard. Their stories have not been told.

In Syria, before its civil war, she documents a complex society in the midst of soul searching about its place in the world and about the role of women. In Lebanon, she documents a country that on the surface is freer than other Arab nations but whose women must balance extreme standards of self-presentation with Islamic codes of virtue. In Abu Dhabi, Zoepf reports on a generation of Arab women who’ve found freedom in work outside the home. In Saudi Arabia she chronicles driving protests and women entering the retail industry for the first time. In the aftermath of Tahrir Square, she examines the crucial role of women in Egypt's popular uprising.

Deeply informed, heartfelt, and urgent, Excellent Daughters brings us a new understanding of the changing Arab societies—from 9/11 to Tahrir Square to the rise of ISIS—and gives voice to the remarkable women at the forefront of this change.

KATHERINE ZOEPF lived in Syria and Lebanon from 2004 to 2007 while working as a stringer for The New York Times; she also worked in the Times’s Baghdad bureau in 2008. Since 2010, she has been a fellow at the New America Foundation. Her work has appeared in The New York Observer, The Chronicle of Higher Education, The New York Times Magazine, and The New Yorker, among other publications. She is a graduate of Princeton University and the London School of Economics.

Praise For Excellent Daughters: The Secret Lives of Young Women Who Are Transforming the Arab World…

“Zoepf… distinguish[es] herself from those who came before her… western female authors who since the last century have implemented well-placed clichés and buzzwords associated with women in the Muslim world… an eye-opening account of women from various backgrounds in the Middle East… Zoepf’s deft meta-commentaries… [are] a promising signal that this genre is turning over a new leaf.”-Nahrain Al-Mousawi, Middle East Eye

"Shocking and moving... Zoepf's knowledge of Arabic, her open and inquisitive mind, her combination of lucidity and empathy, and perhaps her own background as a lapsed Jehovah's Witness allow her to understand these women's lives on their own terms without losing her footing either in their world or in ours." - New York Times Book Review

"Chilling...[Excellent Daughters] is like a "Lonely Planet" guide to the dark underbelly of the purity culture of Muslim societies...[It] exposes the tragic dynamics of power and control that lay siege to the bodies, minds and souls of women and girls through inherited rules of patriarchy, tribalism and morality. " - The Wall Street Journal

“Zoepf’s book directly challenges the Western idea of what it means to be an empowered woman, and a woman in the Middle East, and a reformer. It is a book that can change minds about people who are changing their own world. And it is a book of many stories that, taken together, hold the best kind of danger.”—New America Weekly


“ Zoepf’s deeply personal investigation into the small but radical acts these women commit not only illuminates the choices these women make every day, but also subverts many of the assumptions Western readers make about the Arab world.”—
Washington Post
“Many of the women and girls in Excellent Daughters strive toward freedom, but they do so in ways that most Westerners would be unable to parse.  Zoepf has achieved not only intimate access to this population, but also profound insight into the joys, anxieties, and revelations they experience behind the collective abaya.  Superbly reported and compassionately told, at once clear-eyed and forgiving, these brave narratives will foster understanding, forgiveness, and respect.  This moving book is an act of cultural translation of the very first order.” —Andrew Solomon, author of Far From the Tree and The Noonday Demon


“Zoepf… fluidly merges memoir with reportage while showing the Arab world from a unique perspective…. In her absorbing, window-opening book, Zoepf reveals the variety of women’s lives and interests away from political headlines and conventional stereotypes, and their power, often by small steps, to transform their world.”—Publishers Weekly

“With superb reporting brio, and smart cultural analysis Katherine Zoepf conjures in vivid detail a hidden world that is often caricatured and misunderstood. Her portraits of these women are graceful and absorbing. She offers a rare and moving vision of the arab world in flux.” —Katie Roiphe, author of In Praise of Messy Lives


"Katherine Zoepf has written an unforgettable book. Deft and haunting, smart and empathetic, beautifully observed and sometimes heartbreakingly tragic, Excellent Daughters should be required reading for anyone who cares about the condition of women or indeed the condition of the world. This is a landmark work of non-fiction that is both astonishingly intimate and globally important."-Liza Mundy, Bernard Schwartz Fellow at the New America Foundation and author of The Richer Sex: How the New Majority of Female Breadwinners Is Transforming Sex, Love and Family


“With superb reporting brio, and smart cultural analysis Katherine Zoepf conjures in vivid detail a hidden world that is often caricatured and misunderstood. Her portraits of these women are graceful and absorbing. She offers a rare and moving vision of the arab world in flux.” -Katie Roiphe, author of In Praise of Messy Lives


"Katherine Zoepf's book is so well written, so well reported and so well calibrated that it demands to be read over the course of an evening. During that evening I learned a great deal about the modern Arab world and the role of women in it, and also how they will remake that world in profound ways within our lifetimes."-Peter Bergen, the author of Manhunt: The Ten-Year Search for Bin Laden from 9/11 to Abbottabad

"Excellent Daughters offers a fascinating report from inside the minds of young women in some of the world's most repressive and segregated societies. Katherine Zoepf gives a much-needed voice to the other half of the population in recent years' revolutions, war and upheaval in the Middle East. And whether the characters in the book speak excitedly of entering arranged marriages or why they've chosen to leave their families behind to forge careers and lives of their own, the secrets told by these 'excellent daughters' will challenge an outsider's perspective of women's rights and the choices they make. Changes for women in the Middle East have long been underway, and this book makes clear they look intriguingly different from how we may have imagined them." -Jenny Nordberg, award-winning journalist and author of The Underground Girls of Kabu


“Excellent Daughters takes us behind the veil –exploring the lives, experiences and beliefs of young Muslim women in rapidly changing societies across the Middle East. The stories Katherine Zoepf tells are engrossing in their details and their ability to take us into a world that is hidden from us by the prescriptions of Islam and Muslim men. Equally important, however, they offer insights into the modern Arab world that countless treatises on “the politics of Islam” or “the future of the Middle East” cannot match.” -Anne-Marie Slaughter, President and CEO, New America, and former Director of Policy Planning, U.S. Department of State
or
Not Currently Available for Direct Purchase
Copyright © 2020 American Booksellers Association