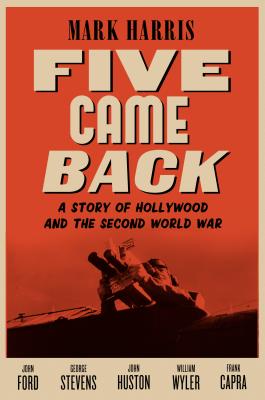 A Story of Hollywood and the Second World War

The extraordinary wartime experience of five of Hollywood's most legendary directors, all of whom put their stamp on World War II and were changed forever by it In Pictures at a Revolution, Mark Harris turned the story of the five movies nominated for Best Picture in 1967 into a landmark work of cultural history about the transformation of an art form and the larger social shift it signified. In Five Came Back, he gives us something even more remarkable: the untold story of how Hollywood changed World War II, and how World War II changed Hollywood, through the director's lens. It is little remembered now, but in prewar America, Hollywood's relationship with Washington was decidedly tense. Investigations into corruption and racketeering were multiplying, and hanging in the air was the insinuation that the business was too foreign, too Jewish, too "un-American" in its values and causes. Could an industry with such a powerful influence on America's collective mindset really be left in the hands of this crew? When war came, the propaganda effort to win the hearts and minds of American soldiers and civilians was absolutely vital. Nothing else had the power of film to educate and inspire. But the government was not remotely equipped to harness it--so FDR and the military had little choice but to turn to Hollywood for help. In an unprecedented move, the whole business was farmed out to a handful of Hollywood's most acclaimed film directors, accompanied by a creative freedom over film-making in combat zones that no one had ever had before or would ever have again. The effort was dominated by five directing legends: John Ford, William Wyler, John Huston, Frank Capra, and George Stevens. They were complicated, competitive men, gifted and flawed in equal measure, and they didn't always get along, with each other or with their military supervisors. But between them they were on the scene of almost every major moment of America's war and in every branch of service--army, navy, and air force, Atlantic and Pacific; from Midway to North Africa; from Normandy to the fall of Paris and the liberation of the Nazi death camps. In the end, though none of them emerged unscarred, they produced a body of work that was essential to how Americans perceived the war, and still do. The product of five years of original archival research, Five Came Back is an epic achievement, providing a revelatory new understanding of Hollywood's role in the war through the life and work of five men who chose to go, and who came back.

Mark Harris is the author of Pictures at a Revolution: Five Movies and the Birth of the New Hollywood, which was a New York Times notable book of the year and was named one of the ten best nonfiction books of the decade by Salon. An editor at large at Entertainment Weekly, a columnist for Grantland, and a contributing editor at New York Magazine, he has written about pop culture and film history for many other publications, including The New York Times, The Washington Post, Time, and GQ. A graduate of Yale University, Harris lives in New York City with his husband, Tony Kushner.