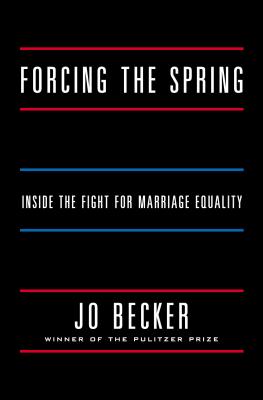 Inside the Fight for Marriage Equality

A "New York Times"Notable Book of the Year
A "Washington Post"Best Book of the Year (Nonfiction)
A "Kirkus"Best Book of the Year
" " A] riveting legal drama, a snapshot in time, when the gay rights movement altered course and public opinion shifted with the speed of a bullet train...Becker's most remarkable accomplishment is to weave a spellbinder of a tale that, despite a finale reported around the world, manages to keep readers gripped until the very end. -"The Washington Post"
A tour de force of groundbreaking reportage by Pulitzer Prize winning journalist Jo Becker, "Forcing the Spring" is the definitive account of five remarkable years in American civil rights history: when the United States experienced a tectonic shift on the issue of marriage equality. Beginning with the historical legal challenge of California's ban on same-sex marriage, Becker expands the scope to encompass all aspects of this momentous struggle, offering a gripping behind-the-scenes narrative told with the lightning pace of the greatest legal thrillers.
For nearly five years, Becker was given free rein in the legal and political war rooms where the strategy of marriage equality was plotted. She takes us inside the remarkable campaign that rebranded a movement; into the Oval Office where the president and his advisors debated how to respond to a fast-changing political landscape; into the chambers of the federal judges who decided that today's bans on same-sex marriage were no more constitutional than previous century's bans on interracial marriage; and into the mindsets of the Supreme Court judges who decided the California case and will likely soon decide the issue for the country at large. From the state-by state efforts to win marriage equality at the ballot box to the landmark Supreme Court case that struck down a law that banned legally married gay and lesbian couples from receiving federal benefits, Becker weaves together the political and legal forces that reshaped a nation.
"Forcing the Spring" begins with California's controversial ballot initiative Proposition 8, which banned gay men and lesbians from marrying the person they loved. This electoral defeat galvanized an improbable alliance of opponents to the ban, with political operatives and Hollywood royalty enlisting attorneys Ted Olson and David Boies the opposing counsels in the Supreme Court's Bush v. Gore case to join together in a unique bipartisan challenge to the political status quo. Despite initial opposition from the gay rights establishment, the case against Proposition 8 would ultimately force the issue of marriage equality all the way to the Supreme Court, transforming same-sex marriage from a partisan issue into a modern crisis of civil rights.
Shuttling between the twin American power centers of Hollywood and Washington and based on access to all the key players in the Justice Department and the White House Becker offers insider coverage on the true story of how President Obama evolved to embrace marriage equality. What starts out as a tale of an epic legal battle grows into the story of the evolution of a country. Becker shows how the country reexamined its opinions on same-sex marriage, an issue that raced along with a snowballing velocity which astounded veteran political operatives. Here is the ringside account of this unprecedented change, the fastest shift in public opinion ever seen in modern American politics.
Clear-eyed and even-handed, "Forcing the Spring" is political and legal journalism at its finest, offering an unvarnished perspective on the extraordinary transformation of America and an inside look into the fight to win the rights of marriage and full citizenship for all.

JO BECKER is a Pulitzer Prize winning investigative reporter for "The New York Times," where she has broken stories on everything from the United States lethal program to kill suspected terrorists to the British phone-hacking affair and the Penn State child sexual abuse scandal. She has taught investigative journalism as a visiting professor at Princeton University, and her work has earned her numerous awards. A "Washington Post" series she coauthored on Vice President Dick Cheney won the Pulitzer Prize for National Reporting.