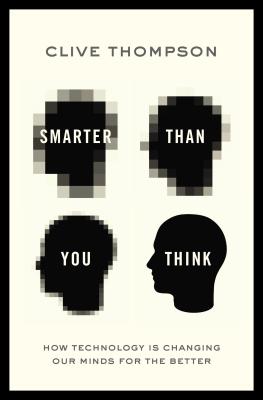 Smarter Than You Think

How Technology Is Changing Our Minds for the Better

It's undeniable technology is changing the way we think. But is it for the better? Amid a chorus of doomsayers, Clive Thompson delivers a resounding "yes." The Internet age has produced a radical new style of human intelligence, worthy of both celebration and analysis. We learn more and retain it longer, write and think with global audiences, and even gain an ESP-like awareness of the world around us. Modern technology is making us smarter, better connected, and often deeper both as individuals and as a society.
In "Smarter Than You Think "Thompson shows that every technological innovation from the written word to the printing press to the telegraph has provoked the very same anxieties that plague us today. We panic that life will never be the same, that our attentions are eroding, that culture is being trivialized. But as in the past, we adapt learning to use the new and retaining what's good of the old.
Thompson introduces us to a cast of extraordinary characters who augment their minds in inventive ways. There's the seventy-six-year old millionaire who digitally records his every waking moment giving him instant recall of the events and ideas of his life, even going back decades. There's a group of courageous Chinese students who mounted an online movement that shut down a $1.6 billion toxic copper plant. There are experts and there are amateurs, including a global set of gamers who took a puzzle that had baffled HIV scientists for a decade and solved it collaboratively in only one month.
"Smarter Than You Think "isn't just about pioneers. It's about everyday users of technology and how our digital tools from Google to Twitter to Facebook and smartphones are giving us new ways to learn, talk, and share our ideas. Thompson harnesses the latest discoveries in social science to explore how digital technology taps into our long-standing habits of mind pushing them in powerful new directions. Our thinking will continue to evolve as newer tools enter our lives. "Smarter Than You Think "embraces and extols this transformation, presenting an exciting vision of the present and the future.

Clive Thompson is a contributing writer for the "New York Times" Magazine and "Wired." He also writes for "Fast Company," and appears regularly on many NPR programs, CNN, Fox News, and NY1, among others.
Loading...
or
Not Currently Available for Direct Purchase