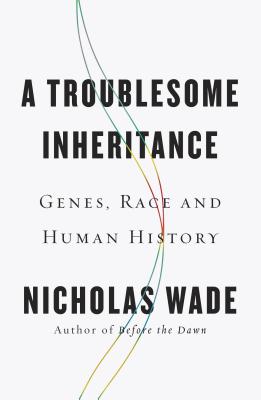 Drawing on startling new evidence from the mapping of the genome, an explosive new account of the genetic basis of race and its role inthe human story

Fewer ideas have been more toxic or harmfulthan the idea of the biological reality of race, andwith it the idea that humans of different races arebiologically different from one another. For thisunderstandable reason, the idea has been banishedfrom polite academic conversation. Arguing thatrace is more than just a social construct can get ascholar run out of town, or at least off campus, ona rail. Human evolution, the consensus view insists, ended in prehistory.
Inconveniently, as Nicholas Wade argues in "ATroublesome Inheritance," the consensus view cannotbe right. And in fact, we know that populationshave changed in the past few thousand years tobe lactose tolerant, for example, and to survive athigh altitudes. Race is not a bright-line distinction;by definition it means that the more humanpopulations are kept apart, the more they evolvetheir own distinct traits under the selective pressureknown as Darwinian evolution. For many thousandsof years, most human populations stayed wherethey were and grew distinct, not just in outwardappearance but in deeper senses as well.
Wade, the longtime journalist covering geneticadvances for "The New York Times," draws widely onthe work of scientists who have made crucialbreakthroughs in establishing the reality of recenthuman evolution. The most provocative claims inthis book involve the genetic basis of human socialhabits. What we might call middle-class socialtraits thrift, docility, nonviolence have beenslowly but surely inculcated genetically withinagrarian societies, Wade argues. These values obviously had a strong cultural component, butWade points to evidence that agrarian societiesevolved away from hunter-gatherer societies insome crucial respects. Also controversial are hisfindings regarding the genetic basis of traits weassociate with intelligence, such as literacy andnumeracy, in certain ethnic populations, includingthe Chinese and Ashkenazi Jews.
Wade believes deeply in the fundamentalequality of all human peoples. He also believes thatscience is best served by pursuing the truth withoutfear, and if his mission to arrive at a coherent summaof what the new genetic science does and does nottell us about race and human history leads straightinto a minefield, then so be it. This will not be thelast word on the subject, but it will begin a powerfuland overdue conversation.

Nicholas Wade received a BA in naturalsciences from King s College, Cambridge. He was thedeputy editor of "Nature" magazine in London and thenbecame that journal s Washington correspondent. Hejoined "Science" magazine in Washington as a reporter andlater moved to "The New York Times," where he has beenan editorial writer, concentrating on issues of defense, space, science, medicine, technology, genetics, molecularbiology, the environment, and public policy, a sciencereporter, and a science editor."
or
Not Currently Available for Direct Purchase
Copyright © 2020 American Booksellers Association