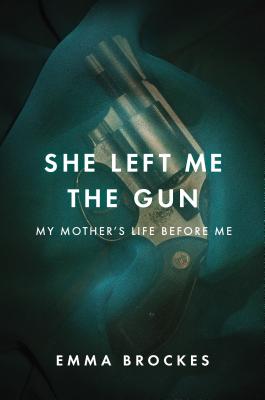 She Left Me the Gun (Hardcover)

My Mother's Life Before Me

"One of those memoirs that remind you why you liked memoirs in the first place... It has the density of a very good novel... As you do with the best writers, you feel lucky to be in Ms. Brockes’s company." --Dwight Garner, The New York Times

A chilling work of psychological suspense and forensic memoir, She Left Me the Gun is a tale of true transformation: the story of a young woman who reinvented herself so completely that her previous life seemed simply to vanish, and of a daughter who transcends her mother’s fears and reclaims an abandoned past.

“One day I will tell you the story of my life,” promises Emma Brockes’s mother, “and you will be amazed.” Brockes grew up hearing only pieces of her mother’s past—stories of a rustic childhood in South Africa, glimpses of a bohemian youth in London—and yet knew that crucial facts were still in the dark. A mystery to her friends and family, Paula was clearly a strong, self-invented woman; glamorous, no-nonsense, and frequently out of place in their quaint English village. In awe of Paula’s larger-than-life personality, Brockes never asked why her mother emigrated to England or why she never returned to South Africa; never questioned the source of her mother’s strange fears or tremendous strengths.

Looking to unearth the truth after Paula’s death, Brockes begins a dangerous journey into the land—and the life—her mother fled from years before. Brockes soon learns that Paula’s father was a drunk megalomaniac who terrorized Paula and her seven half-siblings for years. After finally mustering the courage to take her father to court, Paula is horrified to see the malevolent man vindicated of all charges. As Brockes discovers, this crushing defeat left Paula with a choice: take her own life, or promise herself never to be intimidated or unhappy again. Ultimately she chooses life and happiness by booking one-way passage to London—but not before shooting her father five times, and failing to kill him. Smuggling the fateful gun through English customs would be Paula’s first triumph in her new life.

She Left Me the Gun carries Brockes to South Africa to meet her seven aunts and uncles, weighing their stories against her mother’s silences. Brockes learns of the violent pathologies and racial propaganda in which her grandfather was inculcated, sees the mine shafts and train yards where he worked as an itinerant mechanic, and finds in buried government archives the court records proving his murder conviction years before he first married. Brockes also learns of the turncoat stepmother who may have perjured herself to save her husband, dooming Paula and her siblings to the machinations of their hated father.

Most of all, She Left Me the Gun reveals how Paula reinvented herself to lead a full, happy life. As she follows her mother’s footsteps back to South Africa, Brockes begins to find the wellsprings of her mother’s strength, the tremendous endurance which allowed Paula to hide secrets from even her closest friends and family. But as the search through cherished letters and buried documents deepens, Brockes realizes with horror that her mother’s great success as a parent was concealing her terrible past—and that unearthing these secrets threatens to undo her mother’s work.

A beguiling and unforgettable journey across generations and continents, She Left Me the Gun chronicles Brockes’s efforts to walk the knife-edge between understanding her mother’s unspeakable traumas and embracing the happiness she chose for her daughter.

EMMA BROCKES writes for The Guardian’s Weekend magazine and has contributed to The New York Times, Vogue, Harper’s Bazaar, and Elle. She is the winner of two British Press Awards—Young Journalist of the Year and Feature Writer of the Year—and while at Oxford won the Philip Geddes Memorial Prize for Journalism. Her book What Would Barbra Do? How Musicals Saved My Life was serialized on the BBC. She lives in New York.

Praise For She Left Me the Gun: My Mother's Life Before Me…

"[A] courageous, clear-sighted book, which shifts between memoir and elegy as it examines the persistence of family secrets and the fragile interface between innocence and knowledge ...  Brockes handles her toxic material with a lightness of touch that navigates skillfully between tragedy and bleak comedy... [Brockes's mother] did not need to leave her daughter a gun in the end. Her real bequest to Brockes was the psychological freedom to be able to confront the past without inhibition, and to take straight aim at it. The gun is this book." --The Guardian (UK)

"She Left Me the Gun is quite simply an extraordinary book. In the hands of any halfway decent author, this would be an incredible story: a mother with a mysterious South African past who arrived in England in her early twenties with a beautiful antique handgun and a mission to forget who she used to be. In the hands of a writer as gifted as Emma Brockes, it’s basically the perfect memoir: a riveting, authentic tale elegantly told.'  --Sunday Telegraph (UK)

"Full of intellect and feeling and dartlike expression. It’s one of those memoirs that remind you why you liked memoirs in the first place, back before every featherhead in your writers’ group was trying to peddle one. It has the density of a very good novel... As you do with the best writers, you feel lucky to be in Ms. Brockes’s company throughout She Left Me the Gun. She is mugged; her car breaks down in the middle of nowhere, and swastika-wearing bikers roar up. She never loses her composure... This is a grim story, but it’s also a love story." --Dwight Garner, The New York Times

"An exemplary family history and immensely brave... Brockes’s descriptions of South Africa and her newly discovered family (towards whom she is loyal and generously affectionate) are astute and, one feels, tempered by the tightly coiled wayward nature of the freshly grief-stricken. It makes the slow pace of the revelations all the more honourable and heartfelt. The result is a wise, tender letter of love to a mother and her incredible sense of love and ­necessary self-sufficiency." --Helen Davies, Sunday Times (UK)

"This soul-searching tale is a shocking trail of murder, violence, incest and betrayal that leaves her both shocked and proud ... Emma Brockes writes with dry humour and a refreshing lack of sentiment as she unravels the complex family ties that have become twisted into a difficult and at times almost impenetrable web of hidden suffering." --Daily Express (UK)

"The riveting memoir about how a prizewinning British journalist reclaimed her mother's traumatic past... The story of Brockes’ quest to understand her mother’s past is powerful on its own, but the backdrop against which most of the narrative unfolds—a country with its own history of rapacious violence—makes the book even more poignant and unforgettable."
—Kirkus

“This astonishing, unsettling book examines the relationship between knowledge and love. Vigorously unsentimental, deeply absorbing, and written with fierce wit, it is an unstinting look at what it means to be innocent, at any stage of life, and how obsessively we all seek and avoid the many faces of truth.”
—Andrew Solomon, author of Far From the Tree and The Noonday Demon

“A beautiful, wise book. It deals with some of the grimmest aspects of human experience, but it is also one of the most genuinely uplifting works I have read in years. Emma Brockes’s superb, clear-eyed narration is an object lesson for any aspiring memoir writer. She Left Me the Gun deserves to become a classic.”
—Zoë Heller, author of The Believers and Notes on a Scandal

“Emma Brockes sets out on a delicate journey to uncover a secret locked in the heart of her own family’s darkness. A harrowing tale of murder and incest emerges, unfolding by stages in this utterly compelling psychological memoir.”
—John Berendt, author of The City of Falling Angels and Midnight in the Garden of Good and Evil
or support indie stores by buying on
(This book is on backorder)
Copyright © 2020 American Booksellers Association