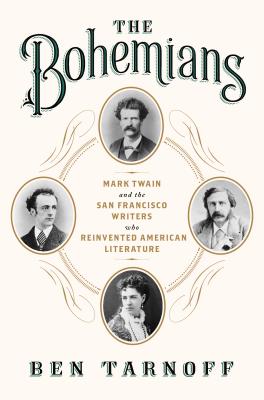 “Four writers who changed the face of American literature -- Mark Twain, Bret Harte, Charles Warren Stoddard, and Ina Coolbrith -- arrived in San Francisco in the 1860s and immediately found the city's 'intoxicating energy' to be just the elixir they needed to create a new American literature free from the 'heavy European influence that dominated the East.' Tarnoff makes the Bohemians come alive both as a group and as individuals in the blossoming West Coast, the site of burgeoning immigration from five continents. This book is an essential reference that needs to be in every home across America.”
— Trayce and Jerry Finney, Hiram Books, Hiram, GA
View the List

"The unforgettable story of the birth of modern America and the western writers who gave voice to its emerging identity"
"The Bohemians" begins in 1860s San Francisco. The Gold Rush has ended; the Civil War threatens to tear apart the country. Far from the front lines, the city at the western edge roars. A global seaport, home to immigrants from five continents, San Francisco has become a complex urban society virtually overnight. The bards of the moment are the Bohemians: a young Mark Twain, fleeing the draft and seeking adventure; literary golden boy Bret Harte; struggling gay poet Charles Warren Stoddard; and beautiful, haunted Ina Coolbrith, poet and protectorate of the group. Ben Tarnoff's elegant, atmospheric history reveals how these four pioneering western writers would together create a new American literature, unfettered by the heavy European influence that dominated the East.
Twain arrives by stagecoach in San Francisco in 1863 and is fast drunk on champagne, oysters, and the city's intoxicating energy. He finds that the war has only made California richer: the economy booms, newspapers and magazines thrive, and the dream of transcontinental train travel promises to soon become a reality. Twain and the Bohemians find inspiration in their surroundings: the dark ironies of frontier humor, the extravagant tales told around the campfires, and the youthful irreverence of the new world being formed in the west. The star of the moment is Bret Harte, a rising figure on the national scene and mentor to both Stoddard and Coolbrith. Young and ambitious, Twain and Harte form the Bohemian core. But as Harte's star ascends drawing attention from eastern taste makers such as the "Atlantic Monthly" Twain flounders, questioning whether he should be a writer at all.

The Bohemian moment would continue in Boston, New York, and London, and would achieve immortality in the writings of Mark Twain. San Francisco gave him his education as a writer and helped inspire the astonishing innovations that radically reimagined American literature. At once an intimate portrait of an eclectic, unforgettable group of writers and a history of a cultural revolution in America, "The Bohemians" reveals how a brief moment on the western frontier changed our country forever.

Ben Tarnoff has written for "The New York Times," the "San Francisco Chronicl"e, and "Lapham s Quarterly," and is the author of "A Counterfeiter s Paradise: The Wicked Lives and Surprising Adventures of Three Early American Moneymakers." He was born in San Francisco."
or
Not Currently Available for Direct Purchase
Copyright © 2020 American Booksellers Association